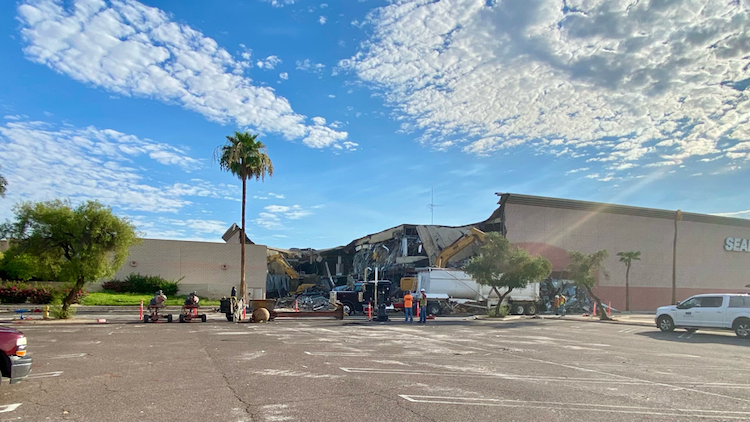 The destruction of Paradise Valley Mall has begun. The demolition phase of the Phoenix shopping center’s redevelopment is officially underway, according to a Wednesday press release. The former Sears store took some of the first hits.

In February, the Phoenix City Council approved a rezoning plan for the 92-acre site at Cactus Road and Tatum Boulevard.

Demolition is expected to continue through the end of the year, according to the release, with new construction beginning in the fall.

When completed, the mixed-use development will include about 2,500 multi-family residences, a Whole Foods, retail shops and office space.

Paradise Valley Mall opened in 1978. The only businesses still currently operating there are JC Penney and Costco, which are accessible through exterior entrances.

The last of the shopping center’s other stores, including Macy’s and Dillard’s, closed earlier this year. Sears shut down back in 2019.

Phoenix-based RED Development reportedly purchased a majority stake in the property from Macerich in April. Civic Center Mall in Scottsdale to Get a $27.5 Million Renovation