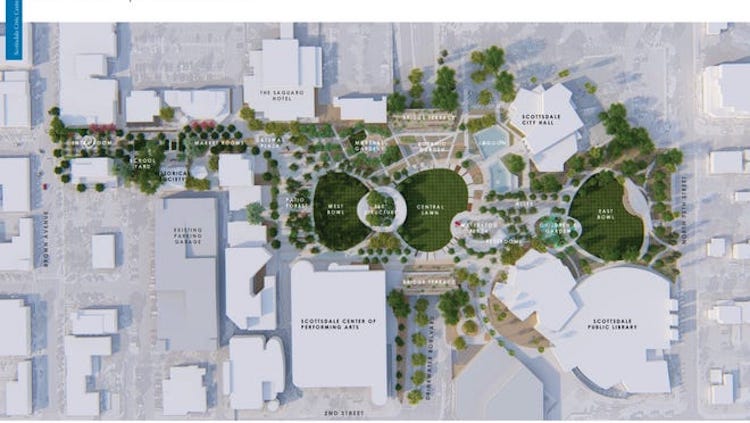 Civic Center Mall in Scottsdale to Get a $27.5 Million Renovation

Scottsdale will start $27.5 million in renovations to its Civic Center Mall this fall to better compete to attract Super Bowl events in 2023 and other major events.

Voters approved a bond to pay for the project in 2019, four years after the city started gathering community input about the space in Old Town. During the process of analyzing the needs of the mall, structural deficiencies that needed prompt response were identified, which led to a 14-month closure of the Drinkwater Bridge for repairs in 2018.

Scottsdale officials said the open-space area is showing its 51-year age with its “outdated restrooms, oversized fountains and other structural and electrical issues” despite its lush landscape and public art. The city also recognized a need to improve access in and out of the park from Old Town.

Keeping in mind that it takes event producers more time and money to plan events with the center’s current infrastructure, the goal is to place Scottsdale in a competitive position to host outdoor events, according to the city.

Scottsdale Tourism and Events Director Karen Churchard said the plans include establishing family-friendly spaces for park-goers as well as creating a smaller-scale event schedule such as yoga sessions or library readings.

Preparations for the renovation are underway and work should start in October. Large portions of the Civic Center are expected to be closed until work concludes in January 2023, although the city will ensure access to all of the surrounding city buildings and businesses.

Local landscape company Dig Studio has been working with engineering company Ritoch-Powell and Associates and design firm Lake Flato on several aspects of the project such as aesthetic components and infrastructure needs.

He said the team realized it was important to go further than just protecting existing elements but also preserving people’s experiences, such as the “ability to stroll through the space, the sound of water, the sound of birds, the shade of big mature trees.”

“When you come into Number 1, an important space both from a civic and community standpoint but also an existing space that has its own rhythms established and the community already loves, it’s more about enhancing the space than anything,” Sobiech said. “So we took this approach we call ‘preserve, enhance and transform.'”

Based on the idea of improving the space, Sobiech said the team established goals and principles for the design, including:

New amenities in the mall will include two new stages, a small wedding lawn at the Marshall Garden, a space for tents, a new botanical garden, an area for children and families, new restrooms that will have family changing rooms and accessibility improvements.

Plans aren’t set in stone regarding major events at Civic Center once construction is completed, although that’s the principal goal of the renovation and city officials have expressed interest in working with the NFL and the Arizona Super Bowl Host Committee to host events related to the Super Bowl in 2023.

Churchard said Scottsdale discussed with the NFL and the Arizona Super Bowl Host Committee in 2018 about hosting events similar to the “Super Bowl Live” that took place in Miami last year during the same week of the NFL Experience.

The Super Bowl Live in Miami was a week-long festival that featured free activities in a culinary stage, water shows, an environment village, evening parades and fireworks.

When Arizona hosted the Super Bowl in 2015, the committee estimated 1 million visitors attended Super Bowl Central in downtown Phoenix, 500,000 attendees went to the ESPN fan festival at Scottsdale Fashion Square and 100,000 people showed up in Glendale for the game and Westgate’s restaurants and tailgate parties.

Since Scottsdale only allows vendors to schedule events at the Civic Center one year in advance, the city hopes to start booking events for the new space next year.

She said rental fees for the new space haven’t been established yet and the city doesn’t have an estimate for the return of its $27.5 million investment. Currently, vendors pay between $1,400 to $3,850 to rent one particular space of the mall or the entire park for the day.

The city also wants to ensure that residents have opportunities to participate in activities at the Civic Center on a regular basis, Churchard said.

“Our hope is that we can have programming going on in the mornings that are more focused on exercise and families. And then from noon until six, more for the workers, the seniors, students, there could be programming that pertains to these groups,” she said. “And then in the evenings, have events go up until, generally, the 10 p.m. timeline.”

Some of the activities the city plans to offer are yoga sessions, library readings and small performances. Churchard said some of these smaller events would be free while others would be paid.

Click here to learn more about the Civic Center Improvements.