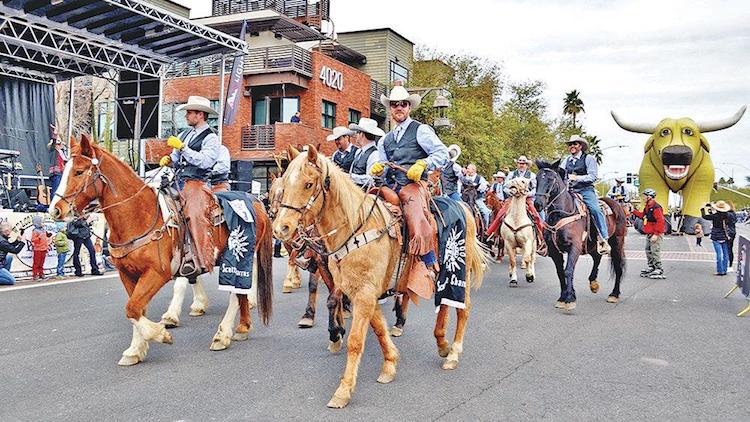 Parada Del Sol is back in Scottsdale this weekend.

The theme of Western legends will be on display in the festival’s showcases of history, live music and shopping — and, of course, the parade.

From 10 a.m. to 2 p.m., the official parade will march through Old Town beginning on Drinkwater Blvd. along Scottsdale Road and finishing at Brown Avenue and Indian School Road.

As it concludes, the Trail’s End Festival will begin and last until 4 p.m. The block party is kid-friendly and has areas with games and pony rides.

There is no admission cost to watch the parade or attend the festival afterward.

This is part of Scottsdale Western Week and the Hashknife Pony Express & Food Truck Round Up.

The Hashknife Pony Express is the only of its kind that still delivers mail for the U.S. Postal Service, according to America’s Library. It travels 200 miles from Holbrook to deliver 20,000 letters on horseback.

On Friday, Scottsdale’s Museum of the West will welcome the Pony Express riders from 10 a.m. to 1 p.m. and offer entertainment for games and crafts with free admission.

The museum will also be open at no cost to visitors from 9:30 a.m. to 5 p.m. on Saturday. Donations are encouraged both days.

Prior to the parade, the Spanish Cabalgando X Arizona dancing horses will perform, according to the festival website. The parade itself will include floats, horse-drawn carriages and marching bands.

Live bands Pearl Ridge, The Raun Alosi Band, The Herndon Brothers and Mogollon will play during the Trail’s End Festival.

There will be a Western Week Farmers Market from 8 a.m. to 1 p.m. on Saturday.

The Arizona Indian Festival, which celebrates the area’s Native American roots with education and activities, takes place Friday from 9 a.m. to 6 p.m. and Saturday from 10 a.m. to 4 p.m.