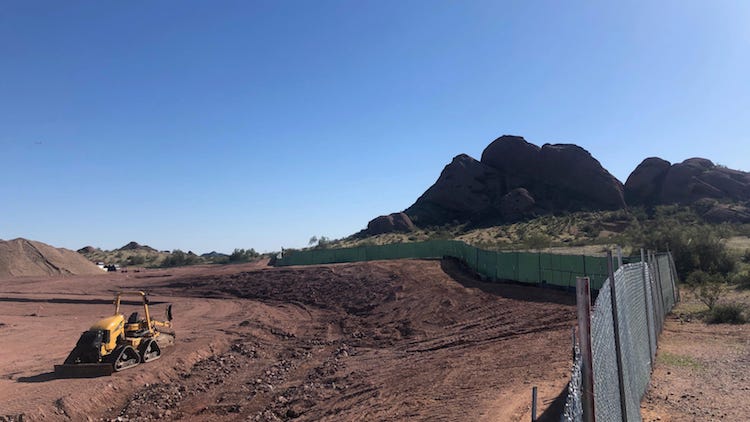 Residents near Papago Park have raised concerns about the renovation and expansion of a baseball complex that will soon house the San Francisco Giants’ year-round training program, saying the construction encroaches further into the surrounding desert than originally promised.

The Papago Baseball Complex soon will host the Giants as part of a deal made between the MLB team and the cities of Phoenix and Scottsdale. The team will still play its spring training games in Old Town Scottsdale, but the Papago Park facility will be used year-round for player development.

The baseball complex has sat mostly empty since the Oakland Athletics moved to Mesa six years ago from its spring training home at nearby Phoenix Municipal Stadium and the year-round training site at Papago Park.

Phoenix has now leased the Papago Park complex to Scottsdale, which in turn subleased to the Giants.

Phoenix estimates the deal would save the city $61 million in operating and maintenance costs, which Scottsdale and the Giants will now pay, and generate $2 million in rental income for Phoenix over the course of the 35-year agreement.

Lasse Norgaard-Larsen lives nearby and is the manager of Friends of Papago Park, a neighborhood group focused on park preservation. The group has protested other park developments in the past and occasionally partners with the city to remove trash, sometimes amounting to hundreds of pounds, from the park.

Norgaard-Larsen says construction of the training facility is the latest in a string of decisions by Phoenix officials that disregarded public input when it comes to making changes in the park.

“Obviously the less public outreach they have to do, the less people like me will be interacting with the city to stop this,” he said. “Once the ship is moving, it’s tough to stop it.”

City officials say the deal has been in the works for four years and residents had several opportunities to raise concerns before the agreement was inked.

Papago Park sits at the intersection of Phoenix, Tempe and Scottsdale and comprises 1,500 acres of desert, including hiking and biking trails, picnic areas and lagoons.

The upgraded baseball facility will grow from 30 acres to approximately 36.75 acres, according to the lease.

But neighbors and park users have raised questions about the construction site’s evolving fence line, which has seemingly encroached further into the desert than was originally promised as work on the facility progresses.

City officials have said the fence around the site will change as construction progresses, but that the completed facility will not go over the 36.75 acres.

“What the Giants are developing there is very similar to what has been there before, it will just be an enhancement,” Scottsdale Assistant City Manager Bill Murphy said. “The fence line may be wider but we are still working within that area.”

In an effort to enhance the existing facility, a large portion of it was leveled out. But residents like Arthur Deal say the “enhancements” lead to only one thing: less desert.

“We thought they were going to slap on a new coat of paint,” Deal said. “We didn’t think they would tear (the complex) down.”

Papago Park is split between two cities, Tempe and Phoenix. In Phoenix’s portion, the area is considered a desert park rather than a preserve. Tempe’s section of the park was declared a preserve in 2018, a designation that prevents development on park land.

“Our department is doing the best we can to provide the community amenities while also maintaining natural areas,” said Gregg Bach, a spokesperson for Phoenix Parks and Recreation.

But Norgaard-Larsen said the leveling of the surrounding desert was not what was promised to residents, and that the promises to revegetate native plants ring hollow.

“You’re not revegetating that. It’s sprinkler systems and grass now,” he said. “That’s taking away public park and giving it to a private, for-profit entity.”

The rental agreement between the city and the Giants has been called a “sweetheart deal.” Some claim it undervalues the quality and history of Papago Park land.

According to the lease, Phoenix will receive annual payments that start at $50,000 and eventually rise to $75,000. The leasing term is for 35 years and the facility will be fully operational by early 2021. The Giants will start making payments in 2022, according to the lease.

By leasing the land to Scottsdale, Phoenix saves millions of dollars and enhances the relationship between the two cities at no additional cost to Phoenix taxpayers.

Phoenix, through a separate agreement with Scottsdale, will be able to use Scottsdale sports facilities where they would have previously used the Papago Baseball Complex. The Giants previously trained at the Indian School Minor League Complex in Scottsdale, which will be more available for residents to use and reserve the fields during certain times of the year once the Giants start training at Papago Park in 2021, according to Bach.

Scottsdale will be able to provide recreational opportunities at the Indian School complex and Scottsdale Stadium, including for youth and adult organizations.

Additionally, the Giants committed to hosting at least four annual clinics at the Papago facility to “benefit Phoenix youth,” according to the lease.

The partnership with Scottsdale also keeps the Giants in Arizona, generating tourism revenue, Bach said. The Giants will continue to play their spring training games at Scottsdale Stadium, near Drinkwater Boulevard and Indian School Road in Old Town.

But Norgaard-Larsen called the deal between Phoenix, Scottsdale and the Giants too good to be true.

With rent starting at $50,000 annually, the monthly cost to rent the approximately 37-acre space is less than $5,000, until the price increases. At the highest annual rent charge of $75,000, the Giants and Scottsdale will pay $6,250 monthly. The average rent in Phoenix for an 801-square-foot apartment is $1,141 per month, according to Rent Cafe.

But the Giants are still paying more than the last tenants of the space, and will pay for the updated facility and cover maintenance costs on the site, too.

Before the Giants approached the two cities about occupying the space, the Oakland A’s used the Papago Baseball Complex for practice and player development. The team moved to a Mesa facility in 2014.

The A’s paid $215,000 or 25% of gross ticket, concession and parking revenue, depending on which amount was greater, according to Bach. The annual rent included use of both Phoenix Municipal Stadium for spring training games and the Papago Park space for additional training.

From 1999 to 2014, the A’s paid an average annual rent of $305,633, while Phoenix was paying maintenance costs for both facilities. As a result, Phoenix paid an average of more than $1 million annually during that same period, according to Bach.

Under the new deal, Scottsdale and the Giants will be responsible for maintenance and operation costs for the complex. The Giants had originally committed at least $35 million in upgrades to Papago Park, but NBC Sports reported earlier this year that the team had invested more than $50 million in the complex.

Residents have questioned whether the cities conducted enough outreach to neighbors and park users ahead of the proposed expansion.

Norgaard-Larsen lives half a mile away from Papago Park and has biked anywhere between 10-20 miles of the park three times a week for the past 10 years. He said he never saw posters, signs or notices of community meetings about the project.

Deal also expressed disappointment that residents were not more directly involved in the process and that city officials have “abandoned” the Papago Park Regional Master Plan written in 2010.

The master plan is a guiding document that defines the goals and policies of Phoenix and Tempe in shaping the park, and frequently references the importance of protecting the park’s natural resources. But officials from both cities have said the master plan serves as more of a guide than a legally binding document.

Murphy said the cities have held several meetings to inform residents of the construction and that this deal has been in the works since discussions first started in 2016.

Approximately a month before the construction began, the city put up construction signs that have stayed up throughout the project, Bach said.

Because the city is renovating an existing facility, it did not have to send the same public notifications that it would have for a new development breaking ground or a rezoning of the land, Bach said.

“If we would have said that somebody was going to come in and build a 10-story hotel, that’s a different process,” Bach said.

Bach said Phoenix plans to continue constructive discussions with the Friends of Papago Park as time passes, but that misconceptions about the park and the project may be hindering conversations.

The expansion of the training facility is not significantly changing what already was on the site, and the land owned by Phoenix isn’t considered preserve land, which has different processes and standards for development, he said.

But Norgaard-Larsen said this isn’t the first time he and his neighbors have flagged concerns about a lack of public outreach. Residents raised similar concerns when city officials paved over desert trails, expanded the golf course into the desert and expanded parking lots into the desert area.

He questioned whether the solution was to finally designate the Phoenix side of Papago Park as a preserve, as Tempe did in 2018.

“The only way to truly protect the Phoenix side of Papago Park is to make it a preserve,” he said. “It’s the only way to keep development from happening.”