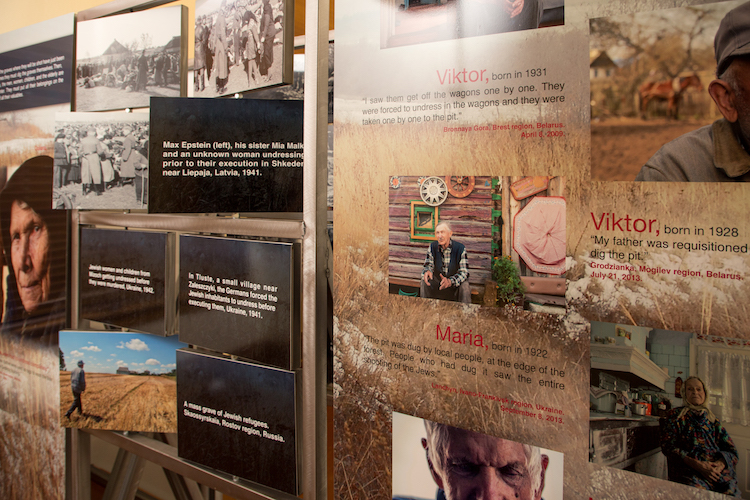 The Phoenix Holocaust Association, in coordination with several organizations, is bringing a community-wide education program to Greater Phoenix in 2020.   Holocaust by Bullets (HBB) is a program of Yahad-In – Unum (YIU), a non-governmental organization based in Paris and founded by Father Patrick Desbois. Holocaust by Bullets will be a three-month program throughout the Valley, now through April 27, 2020.

During World War II, before there were gas chambers, the Einsatzgruppen were roving Nazi death squads, going from place to place shooting Jews and others in large-scale massacres. Their victims were murdered in villages, small towns and large cities – in front of their neighbors.  There were over 2,700 such killing sites where more than 2 million were murdered. This aspect of the Holocaust is not well known.

At the core of Holocaust by Bullets is a 2,000-square-foot exhibition that showcases YIU’s painstaking research, enabling visitors to learn about this lesser-known facet of the Holocaust — which began before the creation of gas chambers — through eyewitness video testimonies, photographs and quotes.

Visitors will have the opportunity to learn about Holocaust by Bullets by touring YIU’s exhibit at the Burton Barr Library and at a smaller exhibition at the Arizona Capitol Museum. School field trips are also being scheduled, where students will be led through the exhibition by trained docents, hear local Holocaust survivors speak and participate in an art project.  Docent-led school tours will also be available at the Capitol Museum.

Another exhibit will be located at the Noble Library on the Tempe campus of Arizona State University beginning March 16.

With a life devoted to researching the Holocaust and fighting anti-Semitism, Father Desbois will deliver the keynote address for Genocide Awareness Week on April 20, 2020 on how Yahad-In Unum has identified and documented the murders of over 2 million Jews and Roma in the former Soviet Union at 2,700 execution sites in seven countries and with 6,700 videotaped eyewitness testimonies. Genocide Awareness week is a program of Scottsdale Community College.

Lectures, films and book talks will also take place throughout the Valley.  The lecture series, which will take place at the Burton Barr Library during the month of February, will feature professors from Arizona State University, the Martin-Springer Institute at Northern Arizona University, as well as a Holocaust expert and daughter of a Survivor.

“We expect to reach upwards of 15,000 people through our programming,” says Sheryl Bronkesh, president of the Phoenix Holocaust Association. “Holocaust by Bullets aligns with our organization’s mission. Our goal is to educate both present and future generations about the Holocaust and the dangers of racism and bigotry through programming that is open to everyone in our community. “

For a complete listing of events, please visit www.holocaustbybulletsaz.com.