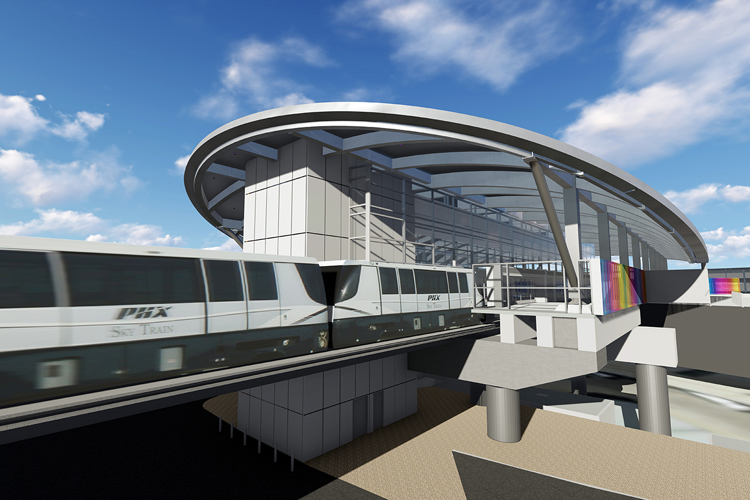 At Phoenix Sky Harbor International Airport, more than 120,000 passengers arrive and depart daily, more than 1,200 aircrafts takeoff and land, more than 5,300 cars are rented, and more than 20,000 parking spaces accommodate passengers, staff, visitors and businesses. Ranked as the No. 2 airport in the United States, Sky Harbor strives to deliver the best service and experience for travelers with innovative and impactful projects.

“Phoenix Sky Harbor International Airport is America’s Friendliest Airport,” Shelbrack said. “Our goal is to provide world-class customer service to every customer every day.  The extension of the PHX Sky Train to the RCC will provide another way of delivering the best service we can. It will provide a convenient connection across the Airport’s facilities, making it much faster and easier for our travelers to access the RCC from the terminals.”

Phase 2, which began in July 2017, is expected to be completed in 2021 and operational by 2022, follows Phase 1 (which links Terminal 4, the East Economy Parking lot and garages and the 44th Street/ Washington Valley Metro light rail station) and 1A (which connects Terminal 4 and Terminal 3), which were completed in 2013 and 2014. The $740 million project will be paid for with Rental Car Customer Facility Charges and airline Passenger Facility Charges. No local tax dollars will be used.

“Several sections of the fixed guideway facility (primary deck) have been completed and turned over to the System Supplier for installation of running surfaces, switches and system operating equipment,” Shelbrack said. “The ‘topping off’ of the RCC station is anticipated mid-December 2019. Additionally, vehicle production has started with the first set of train cars expected to arrive in Phoenix in the summer of 2020.”

Andrew Klem, a project manager for The Weitz Company, a subcontractor to Bombardier Transportation on PHX Sky Train Phase 2, said they are currently constructing the guideway running surface, installing the system operating components and expanding the maintenance facility as part of Phase 2. When the guideway and maintenance facility are completed, Bombardier Transportation will begin commissioning the new 2.5-mile extension in preparation of its opening by summer of 2022.

Klem and Scott Thomas, a project manager with The Weitz Company, said the train’s design features in Phase 2 are consistent with what’s being used on PHX Sky Train’s existing lines, however they said there are plans in place to improve signage and wayfinding to help guests navigate the train schedules.

“Most of the improvements along the new phase will be to the user experience. The main user-friendly feature for Phase 2 is connecting the rental car facility to each airport terminal and the overall broader light rail line. Once completed, PHX Sky Train will connect the RCC to all terminals and the light rail station on 44th and Washington Streets. This connectivity will allow light rail users to connect to all terminals, utilize free park and ride lots, all while saving time.”

Shelbrack said with the completion of Phase 2, travelers will be able to more easily connect to all of Sky Harbor’s facilities. “Many local residents also enjoy coming to the airport just to ride the train and explore the shopping, dining, and various art exhibitions throughout the airport,” Shelbrack added. “This is popular with school groups, families (especially during school breaks) and couples looking for a unique date night. The PHX Sky Train extension will make it easy to enjoy a complete tour of Sky Harbor, all the way to the RCC.”

Airline passengers will also benefit from the completion of the project, Klem and Thomas said, and will improve their travel experience, as they can “deplane, get on PHX Sky Train directly to the rental car facility or move between different terminals. This is especially helpful in the summer months as you will now be able to get off the plane and go all the way to the RCC without being exposed to the elements. This improvement will also minimize the amount of bus traffic within Phoenix Sky Harbor International Airport and eases congestion for arrivals and departures.”

In addition to creating an even better traveler experience with the completion of PHX Sky Train Phase 2, the long-term vision for the Western end of Sky Harbor is entailed in the airport’s roadmap for the future called the Comprehensive Asset Management Plan (CAMP), which the Phoenix City Council voted to send to the Federal Aviation Administration for review and approval earlier this year, Shelbrack said.

“As part of the roadmap, plans include: Moving cargo and support operations to the north side of the airport to create room for expanded terminal facilities; working with the Union Pacific Railroad to partially trench the track and build a taxiway bridge so that planes can access the relocated cargo operations; and providing space for the Air National Guard 161st Refueling Wing to expand on the south side of the airport. Additionally, the airport will renovate some of its older space in Terminal 4, and look to make improvements to traffic flow along Sky Harbor Boulevard,” Shelbrack said.

“Each individual project in this plan will need to be approved by the Phoenix City Council, and is designed to be phased incrementally, so each portion is built only when demand warrants. All projects would be paid for through grants, airport revenues, facility charges and bonds. No local tax dollars will be utilized,” Shelbrack said.

Kirk Fonfara, Sr. business development manager with The Weitz Company, said PHX Sky Train is exciting for Weitz since they have been involved with the project since the beginning with Phase 1 and 1A which were completed in 2013 and have the opportunity to see the project built through completion with each phase.

“We are also fortunate to help contribute to the City’s continued expansion and investment into Phoenix Sky Harbor International Airport. Through this legacy project, Weitz has also had the privilege of working with some outstanding construction, engineering, and design professionals which include Hensel Phelps, Deutsch Architecture, Lea and Elliott, Gannett Fleming, Kimley-Horn, Wilson Electric, Suntec Concrete, and many others over the course of the last 10 years,” Fonfara said.

“Jim Bennett (director of aviation services for the City of Phoenix) has also been a vital asset to our teams over the years leading the efforts to keep the project moving forward through multiple phases. This project is iconic for the City of Phoenix and Weitz appreciates having the opportunity to help construct the PHX Sky Train and partnering with our client Bombardier Transportation,” Fonfara said.

Both Klem and Thomas echoed Fonfara’s thoughts. “Having seen how this project has progressed since the beginning, Weitz has seen this project continue to improve in design and build efficiencies and it’s a true result of collaboration and teamwork between our partners, the City, and Phoenix Sky Harbor International Airport. Keeping access for airport and municipal workers, minimizing traffic delays, and making sure we can construct this project around the clock, are some of the critical challenges that our team has been able to solve through constant communication and proactively and carefully planning each step of the design.”

Click here to learn more about the PHX Sky Train.

Bike Commuter Facility To Open In Downtown Phoenix In 2020