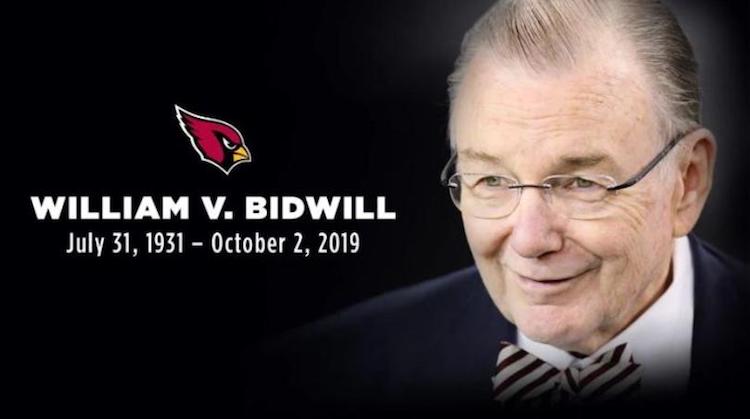 Owner of the Arizona Cardinals, William “Bill” Bidwill has died at the age of 88.

The team confirmed the news in an announcement Wednesday, marking the end of leadership that began in 1972, when Bidwill carried on what had become a family business. Bidwill is survived by five children and nine grandchildren. His wife, Nancy, died in 2016.

“Our dad passed away today the same way he lived his life: peacefully, with grace, dignity and surrounded by family and loved ones,” Cardinals president Michael Bidwill, one of Bill’s four sons, said in a statement. “We are overwhelmed by the support our family has received, not only now but throughout the latest chapter of his life. We are especially grateful to the nurses, doctors and other caregivers whose endless kindness and compassion in recent years have made our dad’s life so meaningful. Above all else, we will remember him as a man devoted to the three central pillars of his life — his immense faith, his love for his family and his life-long passion for the Cardinals and the sport of football.”

Bill’s connection to the Cardinals run deep. A ballboy for the Cardinals back when the team played in Chicago, Bidwill first joined the team as a vice president while attending Georgetown University. His father, Charles, purchased the franchise in 1932, a decade after the team was founded. He and his brother Charles Jr. inherited ownership of the team upon their mother’s passing and continued to co-operate the franchise until Bill bought his brother’s share in 1972.

Quiet and humble, Bidwill was regarded in the NFL as a “league man,” willing to compromise for the good of the organization. That earned him a considerable amount of respect among his fellow owners, and his reputation was a big reason the Valley hosted three Super Bowls.

While Bidwill could be frugal with the Cardinals’ dollars, he was generous outside of football. He contributed to many charities around the Valley, usually anonymously. Bidwill was also a major donor to the St. Peter Indian Mission School in Bapchule, south of Chandler, and every year at Halloween, a busload of kids in costumes would make a visit to Cardinals practice.

It’s unclear who will replace Bidwill as owner, the family has declined comment on the subject for many years. It will likely be Michael Bidwill, who has been team president since 2007.

Flex Lane Coming To I-17