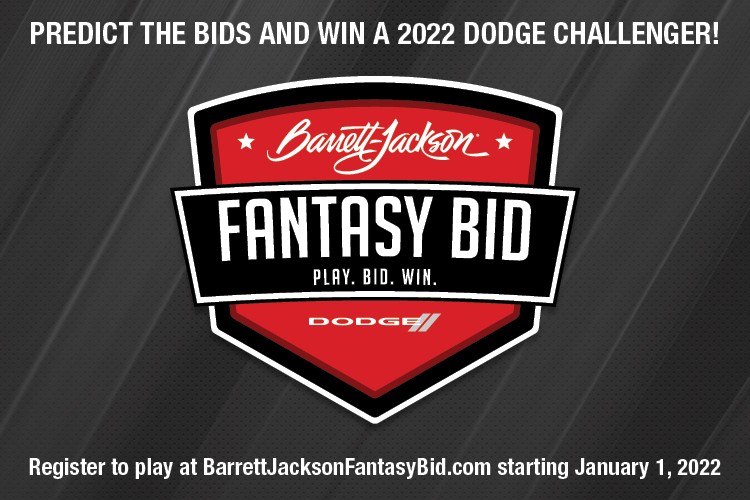 Barrett-Jackson, The World’s Greatest Collector Car Auctions, is revving up the excitement for their 50th anniversary celebration during the 2022 Scottsdale Auction, January 22-30 at WestWorld of Scottsdale, with the return of the popular Barrett-Jackson Fantasy Bid presented by Dodge. New to the game this year will be a yearlong grand prize winner who will take home an all-new 2022 Dodge Challenger. Prizes will also be awarded to individual auction winners from each of Barrett-Jackson’s four annual auctions.

“Our Fantasy Bid online game has been a fan favorite for years,” said Craig Jackson, chairman and CEO of Barrett-Jackson. “It’s an excellent way for our guests in attendance as well as the millions watching around the U.S. and Canada via our broadcasts on FYI and HISTORY, as well as our livestream on Barrett-Jackson.com, to engage even more with the action-packed auction excitement that can only be found at Barrett-Jackson.”

Beginning now, residents of the U.S. and Canada that are 18 or older may register online at BarrettJacksonFantasyBid.com to create an account. Players will be asked to answer a variety of predictive questions about upcoming auction vehicles for players to guess the winning bid. Points will be awarded based on accuracy with 500 points being awarded for exact answers.

Players that compete in Barrett-Jackson Fantasy Bid throughout all four of Barrett-Jackson’s 2022 auctions, including Scottsdale, Palm Beach, Las Vegas and Houston, may compete for the Grand Prize 2022 Dodge Challenger. Individual auction prizes to also be awarded include:

For more information, rules and details on how to register to play Barrett-Jackson Fantasy Bid presented by Dodge, please visit BarrettJacksonFantasyBid.com.

To purchase tickets to the event, click here, and VIP packages are available here.

Where Residents Can Recycle Christmas Trees Around the Valley

A New Mediterranean Restaurant is Opening in Scottsdale

Barrett Jackson 2022: What You Need To Know If You Go