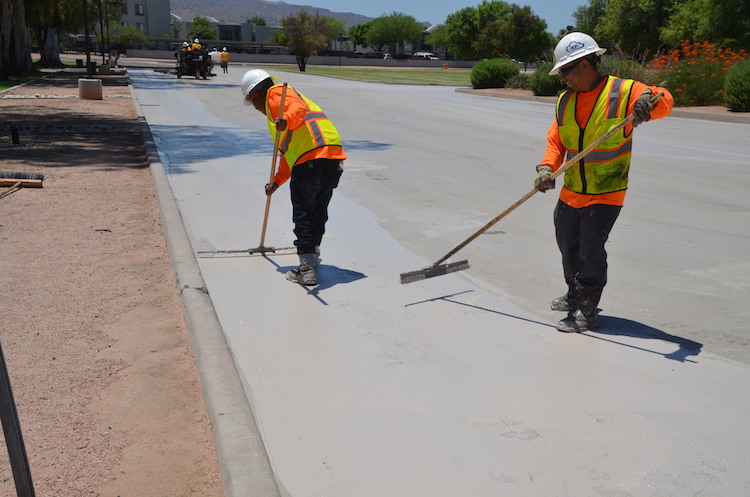 The city of Phoenix has launched a new pilot program where selected portions of city streets are set to receive a cool pavement treatment.

The pavement is lighter in color compared to regular asphalt in order to reflect sunlight and retain less heat.

The treatment has the potential to offset rising evening temperatures in Phoenix, according to Rubben Lolly of Phoenix’s Street Transportation Department.

“Pavement covers about 40% of the urban area and they get hottest in the afternoon and they are the last to cool at night,” she said.

The heat that asphalt has collected leads to the urban heat island effect, which many cities across the country are currently experiencing.

The city of Phoenix is applying the light color coating to extend the life of existing pavement which will also allow them to study the effectiveness and durability of the new material.

Lolly was the special project administrator on the initial installation of cool pavement on June 16th which can now be seen at Esteban Park in South Phoenix.

Depending on the daytime temperature, the coating can reduce surface temperatures by as much as 30 percent.

“On the day we installed our pilot project, we saw a 30 percent difference between the dark asphalt and the cool seal area,” Lolly said. “We did a follow-up check on June 30th and the day temperature wasn’t as high as the day we had installed it, but we still saw a 15-16-degree difference in daytime temperatures.”

Each of Phoenix’s seven council districts are said to have their own portion of street paved with the new cool pavement. The Street Transportation Department has already applied cool pavement to the parking areas and driveways at Esteban Park.

Phoenix has plans to engage university researchers to take measurements and collect pavement-related data over several years. The city hopes results will help with the understanding of cool pavement products and their role in mitigating the heat island effect.