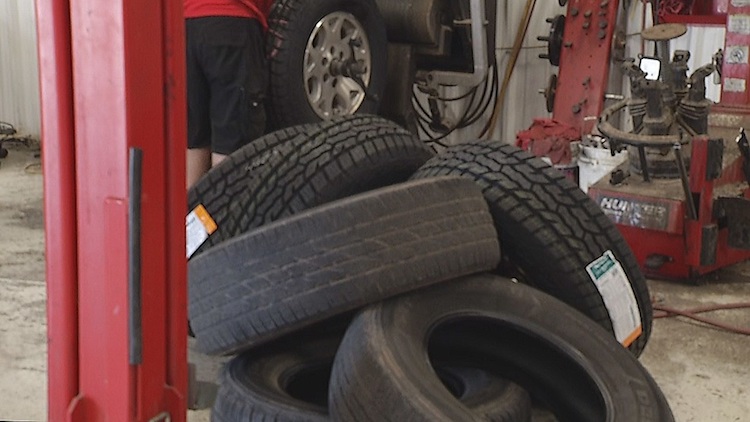 With the Valley having seen an excessive heat wave, AAA is warning drivers to check their tires.

According to auto experts, extreme temperatures beat up tires and can lead to blowouts that put drivers in danger. It also means the possibility of crashes and costly repairs.

“Tire failure is one of the top three reasons for calls during the summer months,” said Michelle Donati, an AAA spokesperson. “If a tire fails while you’re driving, it could not only be an inconvenience, but it could pose a safety hazard,” said Donati. “In fact, there have been fatal crashes because of tires blowing out.”

“This is definitely our busy season,” said Slagle standing in his El Mirage/Surprise shop. “This is where we see a lot of blowouts due to tire neglect. Tire pressure is crucial. That’s the number one thing.”

A sticker on the inside of the door lists the recommended Pounds per Square Inch [PSI].

“Having too little or too much air causes friction inside the tire,” Slagle explained.

The combination with hot pavement could lead to an exploding tire.

Slagle also recommends checking tire treads. If they are worn down, it’s time to replace them ASAP.

According to Arizona DPS Trooper spokesperson Kameron Lee, if you have a tire failure, it’s best to not slam on the brake because it can cause you to lose control. Lee recommends slowly pressing the brake and pulling off to the right side of the road.

If you see someone have a tire blowout while driving, he said to safely get out of their lane.

App Can Help During Monsoon Season

How To Protect Your Pooch This Summer

Beware Of Flood Damage When Buying a Used Vehicle