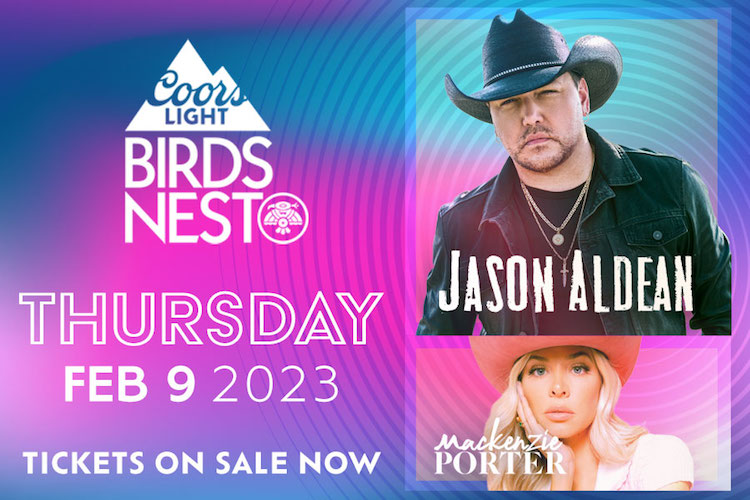 The 2023 Coors Light Birds Nest lineup continues to take shape as multi-platinum entertainer Jason Aldean has committed to perform at the Thursday, Feb. 9 show along with special guest MacKenzie Porter. The popular concert series will take place over four nights (Feb. 8-11) during WM Phoenix Open week, tickets are available now and can be purchased online at www.coorslightbirdsnest.com.

Earlier this summer officials announced The Chainsmokers with special guest Gryffin will close out the Coors Light Birds Nest on Saturday, Feb. 11 – the remaining lineup will be announced as more artists are confirmed.

“Jason Aldean is a top-notch worldwide entertainer known for his electric live performances, he is a great addition to our four-night lineup and is sure to put on quite a show this year for our Coors Light Birds Nest fans,” said Pat Williams, Tournament Chairman for the 2023 WM Phoenix Open.

Additionally, officials announced something new for this year as the 2023 Coors Light Birds Nest will feature four-day music packages that include admission to all four nights of the concert series. The general admission four-day pass sells for $330, while the four-day VIP pass is $1,100.

“This new ticket option is a great opportunity for music fans to make the most of the concert series,” said Coors Light Birds Nest Chairman Billy Malkovich. “This is very much in line with how music festivals package their tickets, we are looking forward to unveiling this for the first time at the Coors Light Birds Nest.”

Coors Light Birds Nest daily general admission tickets for Jason Aldean start at $90, while daily VIP tickets are available starting at $290 each and includes exclusive access to an enhanced VIP area where guests are treated to complimentary food and drinks and access to a premium viewing area for the shows. Organizers encourage fans to buy their tickets early as ticket prices will increase as the event draws closer.

The Coors Light Birds Nest doors will open at 3:30 p.m. each day with its expanded outdoor patio area that will feature more live music, outdoor games, entertainment, and various food and beverage offerings. The special guest opening act will take the main stage inside the 48,000 square foot tent at approximately 6:30 p.m. each night, with the headliners going on stage at approximately 8:30 p.m.

Opening the Thursday night show for Jason Aldean is country-pop trailblazer MacKenzie Porter. Known for captivating vocals and catchy lyrics, her star continues to skyrocket, most recently teaming up with Dustin Lynch for their massive duet “Thinking ‘Bout You” which claimed the No. 1 spot at U.S. country radio for six weeks. Making her mark with releases such as crossover smash “These Days” and earworm track “Pickup,” she continues to make genre history as the first Canadian female artist this century to have five No. 1 songs at country radio. A CMT Next Women of Country inductee, Porter crossed another milestone off her bucket list in late 2021 with her debut on the iconic Grand Ole Opry stage. A performer to her core, she has joined some of country’s biggest names on the road including Blake Shelton, Kenny Chesney, and Brad Paisley.

Ballet Under the Stars Returning to the Valley This Fall

The Taste of Italy and Music Festival Coming in October