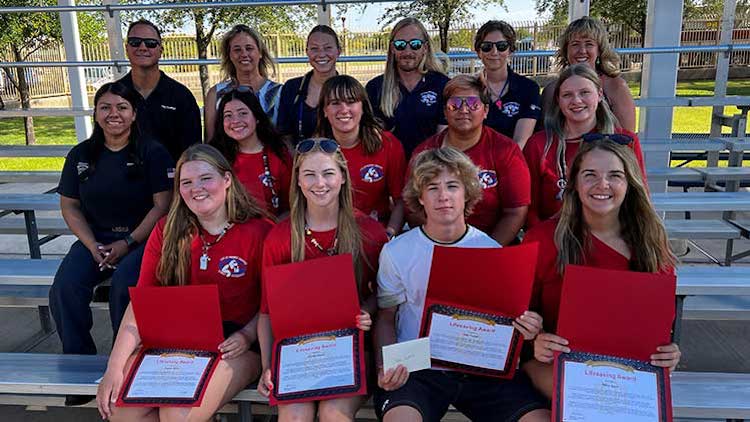 Nine City of Phoenix lifeguards are being called heroes after their quick to action helped save a life.

On June 27, 2022, at 4:30 p.m. a man experienced a cardiac event while driving and crashed his car into a pole and wall near Deer Valley Pool in north Phoenix. After witnessing and hearing the accident, nine City of Phoenix lifeguards responded to the crash, and performed CPR on the driver before Phoenix Fire personnel arrived and were able to get a pulse on him.

Pool staff initiated their Emergency Action Plan which includes clearing the pool of all swimmers before rushing across the street, many barefoot, and assisting the driver.

“We saw one bystander banging on his window, and that’s when we realized he was unconscious,” said Phoenix Lifeguard Hailey Jay. “As soon as [two bystanders] got him out of the car we directed them to move him away from the car because we could smell gas.

“They laid him down and we immediately checked pulse and breathing. We found neither.”

Those nine Phoenix Lifeguards performed CPR, used an AED to shock the patient, putting pressure on the victim’s wounds. Those lifeguards provided the care they were trained to give through the lifeguard certification process.

Two days after the crash, a staff member at the hospital where the victim was taken told pool staff that the victim was alive and breathing on his own.

“I’m so proud of these young adults for sticking to their training and saving this man’s life,” said Phoenix Mayor Kate Gallego. “Our lifeguards are some of the best in the nation, and their quick thinking and life-saving acts shows how vital lifeguards are as first responders in keeping our residents safe.”

“This is just a true testament to their training,” said Phoenix Fire Captain Todd Keller. “Early CPR doubles, almost triples, the survival rate of that victim.”

On Tuesday morning, the Phoenix Fire Department presented the nine lifeguards who responded with a life-saving award for their efforts.

“They’re very competent, well-trained individuals and they intervened,” said Phoenix Firefighter, and former lifeguard, Troy Campbell. Campbell was one the firefighters from Station 41 who responded to the crash. Campbell told the young lifeguards, “you guys are my heroes.”