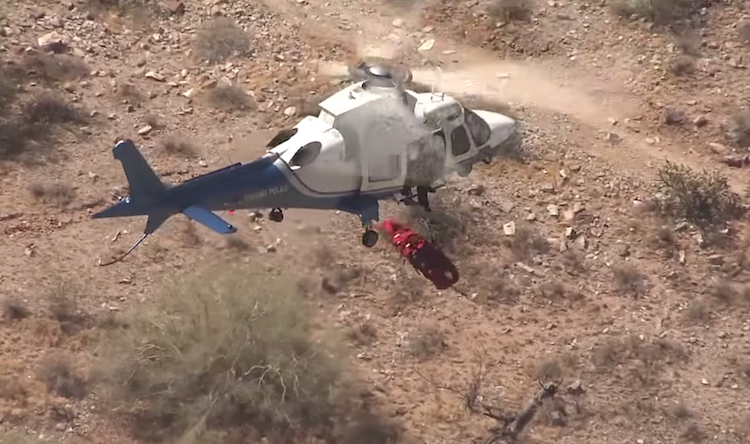 The Phoenix City Council voted to unanimously approve a legal settlement for injuries a hiker suffered in a botched airlift off Piestewa Peak in 2019.

The City Council awarded a $450,000 settlement to the 74-year-old woman that was airlifted off the mountain that resulted in the helicopter rescue basket spinning uncontrollably.

Katalin Metro and her husband, George Metro, had filed a $2 million notice of claim against the City of Phoenix. Metro, who was 74 at the time of the incident was injured in a fall during a hike with her husband on Piestewa Peak in June 2019.

According to the notice of claim, the Phoenix Fire Department unit that responded made the decision to initiate a helicopter rescue, despite Metro’s request not to be airlifted off the mountain.  During Metro’s airlifted rescue, the basket she was in, that was attached to the helicopter, began spinning out of control.

At the time, firefighters said that the rescue basket got caught in a downwind from the helicopter and that a cable line intended to stop the basket from rotating broke during the rescue.

Metro endured the spinning for approximately 40 seconds as the crew tried to raise and lower the basket in an attempt to get it out of the continuous spiral.

Firefighters were able to eventually get Katalin Metro into the helicopter and then to a waiting ambulance nearby.

Reportedly Metro had surgery for cervical stenosis, a spinal cord injury, because of the out-of-control spinning. She also went through weeks of rehab that resulted in medical bills totaling $290,000.

The City of Phoenix released the following statement Wednesday in response to the settlement:

“In this situation, the Metros and the City were able to come to an agreement of this disputed claim. The City denies any wrongdoing or liability.”