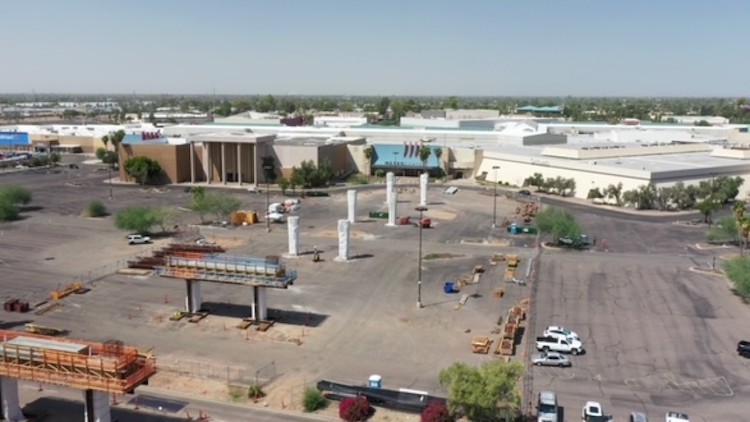 An extension of the light rail through Phoenix is starting to take shape at the old Metrocenter mall parking lot off Interstate 17 and Dunlap.

The extension is known as the Northwest Extension Phase II project that will create the first elevated platform for the light rail.

According to Valley Metro, “this project will connect the Valley’s light rail system from 19th and Dunlap avenues and extend it 1.6 miles to the former Metrocenter Mall.”

“The project also includes new stations, including the system’s first elevated station, and public art. Before the COVID-19 pandemic, more than 50,000 riders rode on Valley Metro light rail trains each day. Light rail has proven to generate economic prosperity for communities along the light rail route in metro Phoenix. Light rail makes the unique offerings of Phoenix, Tempe and Mesa more accessible to others, attracting new customers, businesses and jobs to the area,” the project page states.

The project is nearly two decades in the making as the Phoenix City Council approved the Northwest Extension in 2004.

Metrocenter Mall closed after 47 years in business at the end of June 2020.

“Despite our best efforts to bring value back to the mall, complete maintenance projects, and increase foot traffic, the drop in our occupancy levels due to the COVID-19 pandemic can no longer sustain the operation of this large property,” a letter that was sent to some of the mall’s tenant’s announcing the closure stated.

Metrocenter Mall sits nearly empty now with a Dillard’s store that is still open — and the parking lot issued for a COVID-19 testing location.

Construction of the light rail is now seen from I-17 with large structures going up that will be a part of the elevated station.

City officials are talking with potential developers to see what could be next for the Metrocenter lot but as of now there likely won’t be any updates until the end of this year, or early 2022.

There are still restaurants that sit along the I-17 corridor and businesses near the old Metrocenter Mall. The city is offering financial assistance to small businesses if construction of the light rail impacts them.

The program administrator, Prestamos CDFI LLC, is now accepting applications for the program.

The light rail construction is expected to finish in 2024.