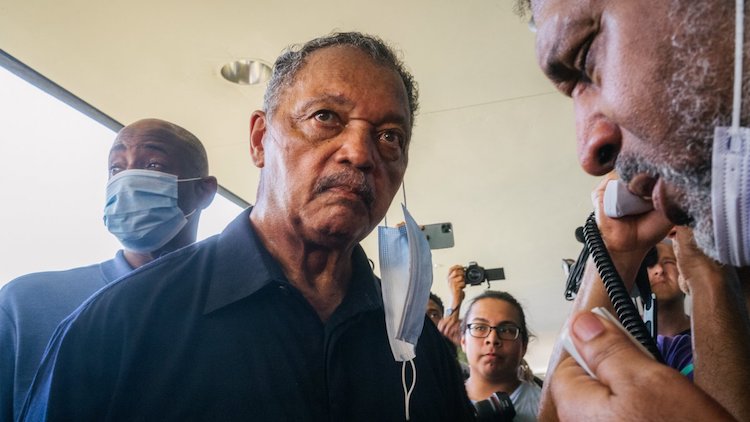 On Monday, civil rights leaders Revs. Jesse Jackson and William Barber, were among 39 people arrested after refusing to leave the Phoenix office of Democratic U.S. Sen. Kyrsten Sinema, who has faced unrelenting pressure from liberal activists over her opposition to ending the filibuster to pass voting rights legislation.

Repairers of the Breach, the organization that organized the sit-in, said those arrested are facing criminal trespassing charges.

Jackson, known as one of the nation’s most prominent civil rights leaders, said the U.S. is in a “civilization crisis” with “battle lines drawn,” and he urged activists to fight nonviolently for their rights.

“The power’s in you, the people,” Jackson said.

Passing voting rights legislation is a top priority for congressional Democrats and progressive activists, who believe it is essential to push back against state-level efforts by Republicans to impose new restrictions on voting. It’s been hindered by the filibuster, which prevents Democrats from passing most legislation without Republican support.

Sinema, a moderate Democratic senator, has ruled out changes to the filibuster, which she says encourages bipartisan cooperation and more lasting legislative compromises.

Phoenix police said at about 9:40 a.m., detectives responded to the area of 40th Street and Campbell Road to assist with a planned demonstration.

The group told authorities the planned to walk from that location to a business near 32nd Street and Camelback Road.

At approximately 11 a.m., the group arrived at the business complex where the property manager asked that they leave the private property.

According to police, officers reportedly told the group several times to leave the premises, which was ignored.

“The group continued to refuse to leave and were interfering with normal business operations,” Phoenix police said.