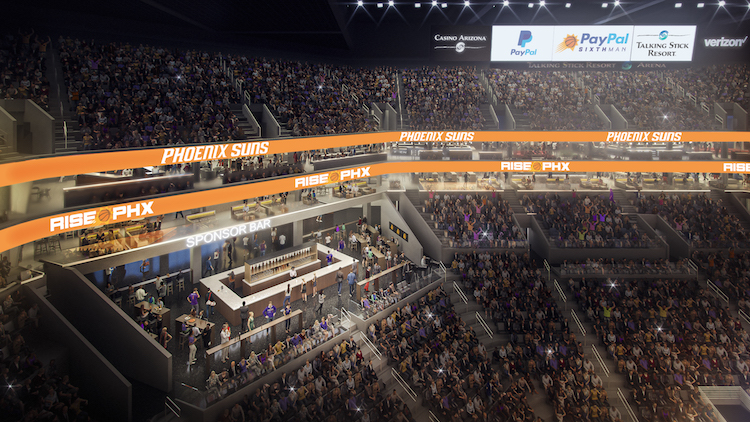 The Phoenix Suns Arena has had many names over the years and In May, Phoenix Suns managing partner Robert Sarver mentioned their newly renovated arena would be getting a new name in the “near future.”

The time has come. An announcement was made today the arena is getting a new name. The Suns, Phoenix Mercury and Real Mallorca announced Friday a new long-term arena-naming partnership with Footprint.

The Phoenix Suns began playing in the arena at the start of the 1992-93 season. Prior to that the team played at Arizona Veterans Memorial Coliseum since the franchise first launched in 1968.

The 17,000-plus-seat downtown venue will now be called Footprint Center.

“It’s going to be one of the most unique partnerships in sports,” Sarver said.

Footprint, a material science company based in Gilbert driven to “create a healthier planet by reducing dependency on single- and short-term use plastics,” works with major consumer packaging companies such as Conagra out of Chicago, but will further tap into the sports world beyond the Suns.

The company also has the stadium of RCD Mallorca, a Spanish-league soccer team Sarver bought a controlling share of for $21 million in 2016 along with Steve Nash and a group of North American investors.

“This is a real opportunity to support our customers globally and continue to innovate globally,” said Footprint CEO Troy Swope, also noting the company is building a factory in Poland and has operations in Europe and Netherlands.

The financial terms with Footprint were not revealed. The naming-rights contract with Talking Stick Resort wasn’t renewed after the five-year deal ended in November 2020.

Sarver started with a list of around 50 companies that was narrowed down to a dozen during a nine-month process to finalize a naming partner.

“We took a closer look at local companies to try to see if there are any local companies in our own backyard that this could make sense for and that’s where Footprint’s name came up,” Sarver said.

“We saw this opportunity to partner with the Suns is to continue our innovation,” Swope said. “The Suns gave us great freedom to innovate and create and develop new water bottles, if you will. Plant-based technologies to completely get plastic out of sporting venues. It gave us a great platform to educate people on the concerns of plastics in our food.”

Starting Friday, temporary signage will be placed on the far left and far right of the arena 25 feet high.

“This partnership is really going to create what we would call a living innovation lab for Footprint and they’re going to help us become plastic free over time,” Sarver said. “We’re going to help them by getting their brand out internationally. Right now, in the finals, there’s people from 230 countries and probably a billion people focused on the NBA right now. They’re going to help us innovate and transform how sports venues operate starting with our venue and hopefully that will spread to other venues.”