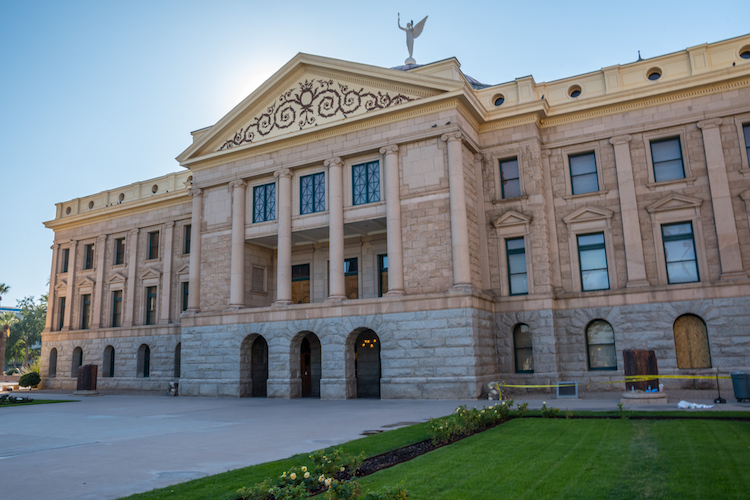 Stand at the corner of 17th Avenue and West Jefferson Street in Phoenix and you will find yourself in the geographic center of Arizona’s government.

There’s not much to see.

Sure, the grass and palms around the Capitol give it a touch of green. But the copper dome of the old state Capitol is obscured by the Senate’s concrete office building. A parking lot is across the street. Yet another parking lot sits diagonally across the street in Wesley Bolin Plaza. And overlooking the plaza from the south are two very forgettable concrete and glass state office buildings.

“What you see now is sadly an all-time low,” said Kevin DeMenna, a lobbyist who has been around the Capitol since the early 1980s and has turned an old home near the Legislature into his office.

Much of the residential neighborhood that surrounded Arizona’s Capitol was bulldozed during the past 60 years and replaced with government office buildings and parking lots.

As the neighborhood’s biggest landlord, the state government has tremendous power to shape its future and the area may be on the cusp of another big shift.

Gov. Doug Ducey’s proposed budget calls for demolishing the two office buildings on the south side of Bolin Plaza, clearing the way for redevelopment of an entire city block. The governor even touted the idea in his State of the State address, offering it as a sort of physical manifestation of his effort to cut the size of state government.

Eager to get rid of office space, state officials say they hope to attract mixed use development to the area, such as restaurants, offices and condos.

This comes as Valley Metro plans to expand its light rail network west from downtown, with new stops around the Capitol.

And new investors are moving into the neighborhood here and there with co-working spaces and plans to reopen an old church as an event venue.

A former speaker of the state House of Representatives, Tobin holds the keys to the Arizona government’s real estate around the Capitol in his current job, from the carefully crafted façade of the old agricultural building to the modernist transportation department campus.

It is a small empire, with the state owning entire blocks radiating out from the Capitol. And Tobin wants to get rid of some of it.

Even before the COVID-19 pandemic, Tobin was interested in shifting more state employees to working from home.

The Department of Administration ran a pilot project and Tobin said the results were encouraging. Staff could cut commutes and the associated stresses and costs. Meanwhile, productivity improved, he said.

Many state employees went on to work from home during the pandemic.

The state workforce actually grew during the pandemic, but the state’s physical footprint didn’t. The latest numbers from the state’s annual workforce report show a state government that was larger in fiscal year 2020 than in the past four years, though still down, just slightly, from the beginning of Ducey’s administration.

“We knew that we had much more demands this past year, and we allowed our agencies to bring more employees on,” said Daniel Ruiz, Ducey’s chief operating officer.

Since so many workers shifted to working from home, the state created a workspace that allows for flexible office space where employees who primarily work from home can come in for meetings or to work from a different location for a day or two.

“We think this will help attract a different demographic of state employees, maybe recent graduates who want to contribute to public service, but would want the flexibility of working from home and the ability to work in sort of a cool workspace when there’s a need,” Ruiz said.

The state has also consolidated spaces: the Arizona Health Care Cost Containment System, the state’s Medicaid program known as AHCCCS, for instance, moved from two buildings into one, saving $1.2 million in fiscal year 2020, Ruiz said. The Department of Economic Security plans to close 14 locations with private leases across the state, saving about $1 million, and co-house their spaces with the Department of Transportation in these areas so services are still available, Ruiz said.

State workers seem to agree. Last year’s employee engagement survey showed more favorable responses than previous years. More than half — 59% — of state employees worked from home at least one day per week in 2021, according to the survey. And 86% agreed that remote work had a positive impact on their work experience.

As for whether remote work for state employees will remain the norm going forward, it depends on how employees respond over time and how agencies manage it, Ruiz said.

“Whatever is going to make the agency successful is ultimately our goal here,” he said.

With this shift, the state can get rid of more office space around the Capitol, Tobin reasoned. He argued some state offices are ready to go.

The two buildings on the south side of Wesley Bolin Plaza are occupied by the Department of Corrections, Rehabilitation and Reentry.

While they were only constructed in the 1970s, the state reports that catching up on deferred maintenance would cost millions.

Lawmakers have raised questions about why the state government has not maintained the buildings, but Tobin contends it’s best to tear them down.

A resident of Prescott, he likened the plaza to Arizona’s own equivalent of the town square. It is the state’s center — but there is not much to it, unlike the courthouse square in his hometown. The streets empty out after work hours. No cultural venues or restaurants lure Phoenicians toward the Capitol at night or on weekends. The nearest coffee shop is across Van Buren Street, for example. Dining options are limited.

Tobin does not have any definite plans for the empty space that will remain or, for that matter, the sites of some other recently demolished government buildings. The state tore down the old Attorney General’s Office building at 12th Avenue and Washington Street after officials moved out in late 2017. It remains a vacant lot. But Tobin has some ideas.

“Anything could become of those buildings in the future. We could sell them off. My personal feeling is I’d like to see some mixed-use down there,” he said.

A master plan the department released in February 2020 may offer a glimpse of the neighborhood’s future.

Some of its complaints about planning in the area will sound familiar to anyone who read a similar plan from the 1990s — little has changed.

The new plan, commissioned by the state Department of Administration and written by Matrix Design Group, noted that all the government office buildings crowd out space for other uses of the neighborhood.

A glut of parking lots — entire blocks of them along Adams Street — make for an inefficient use of the space, planners added.

The plan included one rendering that depicted Wesley Bolin Plaza with a new building to the south on the site of the office buildings slated for demolition. But instead of new offices, the image included a hotel and retail space.

The plan also calls for mixed-use residential development along Washington Street immediately east of the Supreme Court building, where the Attorney General’s Office once stood.

The concept calls, too, for eliminating some of the deserts of parking lots that flood the neighborhood.

For example, new government office buildings proposed for parking lots immediately to the north, west and south of the state Capitol could consolidate state employees directly around the Capitol instead of stringing them out along Washington and Jefferson streets.

The plan also calls for turning a long row of state-owned parking lots along Adams Street a few blocks east of the Capitol into multi-family housing.

Much depends on where exactly Valley Metro routes light rail tracks. In the planning stage, Washington and Jefferson streets are under consideration for future routes.

Much also depends on the future of the Human Services Campus to the southeast off Madison Street.

While Phoenix has approved an expansion of the shelter as tents have proliferated along the sidewalks, its staff contend the expansion is still not enough for a facility that is stretched thin amid an increase in homelessness in the Valley. Neighbors and the owners of nearby businesses have argued against an expansion, though, contending the shelter has overwhelmed the neighborhood.

To some observers, the debate has underscored the extent to which officials at all levels of government have overlooked and neglected this part of town.

In a January opinion column published in The Arizona Republic, former state Housing Department Director Sheila Harris and architect Mo Brooks argued a 1997 plan for the area was ignored for decades. They called on the city to create a new model of improvement district that will attract business and affordable residential development.

All the more reason, some argue, for the state to reach out and include the neighborhood in its plans for the future.

That does not seem to be happening, though.

“The state has a way of doing things under the radar,” said Eva Olivas, executive director and CEO of the Phoenix Revitalization Corporation, which advocates for neighborhood revitalization, particularly south of downtown Phoenix.

The public could have a particularly big say in the future of the area precisely because the public owns so much of the land.

Drive down Washington Street facing the dome of the Capitol and there is not a block west of 10th Avenue controlled entirely by private owners.

Those are the public’s office buildings and empty lots.

The public once had an obvious forum for debating how to use all of this land.

The government mall planning commission was formed in 1985 and had broad oversight over development in the area stretching from 19th Avenue to Seventh Avenue, Van Buren Street south to the railroad tracks. DeMenna chaired it when the Legislature disbanded it in 2018 and handed its powers to Tobin.

DeMenna sees the neighborhood, with land the state is interested in repurposing, as the next Roosevelt Row — the next boom around downtown Phoenix.

“That mall is the redevelopment opportunity of the century,” he said.

What is missing is a salesman or even just a clear vision, he argues. It is not hard to see the possibilities, though, or the rich history.

The neighborhood includes older homes, with several on the National Registry of Historic Places. There’s a Carnegie library, completed in 1908, surrounded by a park.

Long closed to the public, its entry in the National Registry of Historic Places captures a very different time in the neighborhood. There was a bandshell in the park for concerts and lectures, plenty of room for picnics, and trees casting plenty of shade.

Those days are over.

Olivas and several lawmakers — as well as advocates who have followed changes in and around downtown Phoenix for years — said there was much they did not know about the Department of Administration’s plans. Most did not know the state planned to tear down two buildings on Wesley Bolin Plaza. Many had not seen the most recent master plan for the area released in 2020.

Olivas argued the city and state have failed for years to help maintain the neighborhood. And she argued the state should do a better job of working with neighborhood residents on future development.

“If they’re going to demolish it and sell it, what they put up matters,” Olivas said of the office buildings on Bolin Plaza.