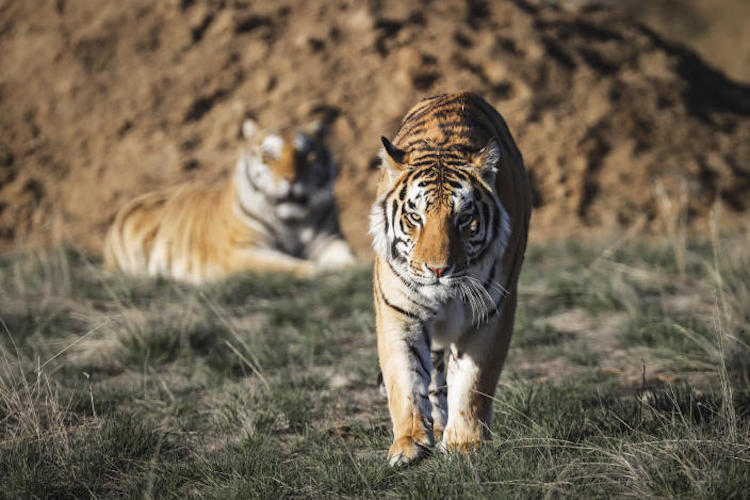 An exotic wildlife sanctuary and nature park in northern Arizona has taken in seven Big Cats that were rescued from Jeff Lowe’s Tiger King Park in Thackerville, Oklahoma.

Last week, the U.S. Department of Justice announced that it seized 68 animals — lions, tigers, lion-tiger hybrids, and a jaguar — from Lowe’s wildlife park, which he owns with his wife, Lauren, for alleged violations of the Endangered Species Act (ESA).

The Lowes gained notoriety from Netflix’s Tiger King documentary, which shed light on the world of exotic animal parks and their owners, but also the contentious rivalry between Joe Exotic (real name: Joseph Allen Maldonado) and Carole Baskin. Exotic is currently in federal prison serving a 22-year sentence in a murder-for-hire plot against Baskin, as well as ESA violations.

The DOJ said it has inspected Lowe’s animal park three times since mid-December 2020 and cited the couple for “failing to provide the animals with adequate or timely veterinary care, appropriate nutrition, and shelter that protects them from inclement weather and is of sufficient size to allow them to engage in normal behavior.”

Seven of those animals are now under the care of the Keepers of the Wild Nature Park in Valentine, Arizona, which is about 35 minutes northeast of Kingman, Arizona, or three-and-a-half hours from downtown Phoenix.

Danielle M. Nichols, a deputy spokesperson for the U.S. Department of Justice, confirmed in an email that some animals were transferred to the Arizona sanctuary. She had no further comment.

Arizona Game & Fish was not involved with the transfer, a spokesperson said. The U.S. Fish and Wildlife Service and the United States Department of Agriculture Animal and Plant Health Inspection Service deferred comment to the U.S. Department of Justice.

“We are so grateful to have the opportunity to care for these wonderful animals and to work with federal agencies and other accredited sanctuaries to help rescue and protect endangered animals,” said Jonathan Kraft in a statement on the sanctuary’s Facebook page. Kraft founded the animal sanctuary in 1995.

Kraft said he was contacted by the Department of Justice a while ago to see if they could house the animals. He said they received seven cats — one lion and seven tigers, including a Siberian tiger.

The seven cats were transported to the Arizona sanctuary on Tuesday, May 18, according to Lara Kraft, vice president, chairwoman, and media director for Keepers of the Wild. All of them are in their habitats and can be seen by the public.

Kraft said some of the cats were stressed out when they arrived, largely due to being transported from one place to another, and said it took some of the cats a few days to acclimate to their new habitats and the park’s routines.

“It’s a little freaky for them in the beginning. Some cats probably took a couple of two, three days before they got used to our routine in how to come to the tubes for feeding,” he said.

“But when you see that lion or any of these cats walk up to a real-life tree and rub all over it — that’s the first time in their life they had an opportunity to do that and feel grass under their feet and be able to run through the weeds and have a lot of enrichment in a giant habitat — it’s just spectacular to watch. That’s why we do this because the rewards are so great,” he said.

It’s unclear how long the cats will be under the care of Keepers of the Wild as the DOJ’s investigation continues, said Kraft. But, he said he will care for them as if they will be with him permanently.

He said the addition of the seven cats will increase the park’s food budget by at least $120,000, which doesn’t include any necessary medical or health care. People can support the park by visiting or by donating to it.

Keepers of the Wild is home to more than 130 animals that have been rescued or donated, including Bengal Tigers, an African Lion, cougars, grizzly bears, wolves, coyotes, and other animals, he said.

The park is open Wednesday – Monday and is closed on Tuesdays.

Click here to learn more about Keepers of the Wild.

Be Prepared for Monsoon Season