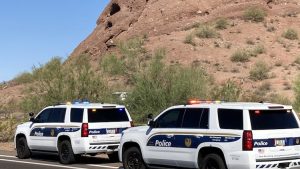 Phoenix police are conducting two homicide investigations near Papago Park after two bodies were discovered near a hiking trail Sunday morning and in a nearby pond.

Officers were called to a scene around 8 a.m to an area near Galvin Parkway and McDowell Road. When officers arrived they located the caller who pointed them toward the body. The body was found on one of the trails. Detectives say the victim had suffered blunt force trauma.

At around 11:20 a.m., responding to a separate incident, officers found a second body in a pond on the south end of the park near Van Buren Street and Galvin Parkway. Authorities called in a dive team to recover the man’s body. Police say that investigation is being handled as a possible drowning with no suspicious circumstances.

The cause of deaths will be determined by the Medical Examiner’s office.

Those with any information surrounding these two cases are urged to call the Phoenix Police Department or Silent Witness at 480-WITNESS.

Yoga in the Outfield of Salt River Fields