The Frederick on Missouri: New Shopping Complex In The Upper Middle

What is old, is new again! At least that is the case for one central Phoenix mid-century building. The Upper Middle has a new place to check out, filled with new great local businesses to support.

The Frederick is a redevelopment project located at 1215 E. Missouri Avenue in North Central Phoenix and was an idea created by Chantell Nighswonger who was looking for a second location of her boutique clothing store. Her goal was to find a place that was close to neighborhoods that offered more foot traffic, and had affordable rent.

Nighswonger couldn’t find it, so along with her husband, created it themselves.

She and her husband have spent the last two years renovating a former office complex and dental office into The Frederick on Missouri — or The Fred — on Missouri Avenue, between 12th and 13th streets, in Phoenix.

First developed in 1895, North Central Phoenix is one of the sought after neighborhoods in the valley. The post war housing boom created the classic mid-century ranch homes that define the neighborhood. The mid-century building that now is The Fred, has been transformed into a neighborhood retail center consisting of a restaurant, a cafe and 8 small businesses.

“We really loved that it was true to the 1960s. It’s a beautiful mid-century low-profile building. So, we wanted to keep that. So we have the lower ceilings, but it feels very mid-century,” Nighswonger said.

There are six businesses open at the complex, most of them independent, local, and female-owned businesses. A grand opening is being held on Saturday, from 11 a.m. – 4 p.m.

Later this fall, a coffee shop and bar, a restaurant, and a shaved ice concept are expected to open. There are also plans to add more landscaping, firepits, and small seating areas.

The Frederick is located at 1215 E Missouri Ave, nestled between Uptown Phoenix and the Biltmore Area. 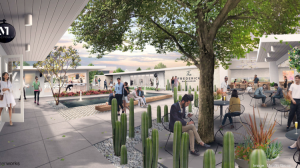 Here are the businesses currently open at The Fred:

Creative Kind: A Tucson, Arizona-based gift shop that sells candles, mugs and tumblers, hats, postcards, and jewelry from Arizona artists and companies. They also have plans to put on craft workshops and DIY classes.

Cricket & Ruby: A Scottsdale-based children’s boutique that sells clothing, some toys, and books.

Melt by Melissa: A Scottsdale-based beauty shop that does brows, facials, skincare, and other services.

Businesses To Open Later This Year:

Batea Boutique: A Tucson, Arizona-based store that specializes in vintage clothing, home decor, and gifts. They are moving their Tucson store to Phoenix.

Mahalo Made: A dessert shop owned by radio personality Lady La that will sell Hawaiian shaved ice and steamed buns. It is expected to open sometime over the summer.

Berdena’s: A coffee shop in Old Town Scottsdale that sells specialty coffee drinks and pastries. In the evening, Berdena’s will also sell beer and wine.