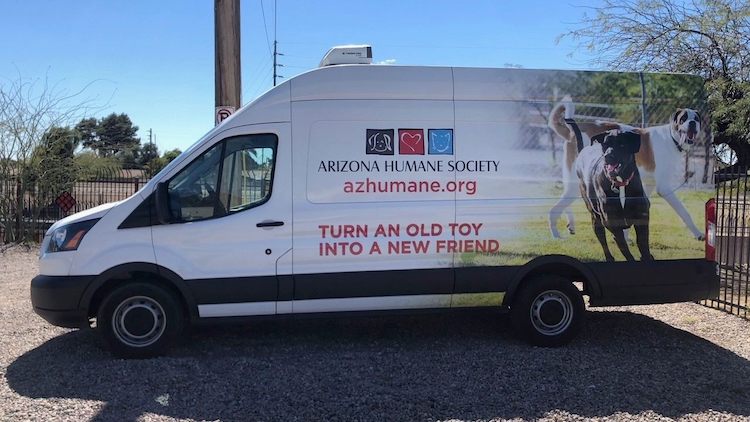 Phoenix police are asking the public to be on the lookout for a van stolen from the Arizona Humane Society Tuesday afternoon.

At around 3:30 p.m., officers responded to a call of an assault near Seventh Avenue and Hatcher Road. When officers arrived, they located the suspect in the area.

However, police said the suspect fled from the officers and ran through the doors of the Arizona Humane Society Sunnyslope campus, which is located at 11th Avenue and Hatcher Road. Witnesses say the suspect ran through the public clinic and out into the alley.

The suspect then approached a shelter staffer, who was getting out of a marked Arizona Humane Society transport van. Police say the man carjacked the van from the shelter employee. Police say as the suspect drove away, he struck a police SUV with no one inside.

The staff worker was not hurt, and no officers were injured. “I know that she was coming back, luckily, with the van empty, no animals in it and was just returning back to base, going home for the day. I know she was shaken up,” said Lisa Lannen, a veterinarian at the Arizona Humane Society.

At this time, the Arizona Humane Society transport van has still not been located.

The missing vehicle is a 2016 Ford Transit Van with branded animal wrap on the sides and back. The number 86 is written on the driver’s side near the side view mirror. The van has an Arizona license plate CJ98261. If you see it, you’re asked to call 911.

“As a nonprofit organization that relies on donations, we utilize this vehicle to safely transport pets amongst our locations and to help take in pets from other shelters around the Valley when they are overcrowded,” says Bretta Nelson with the Arizona Humane Society.

The Frederick on Missouri: New Shopping Complex In The Upper Middle