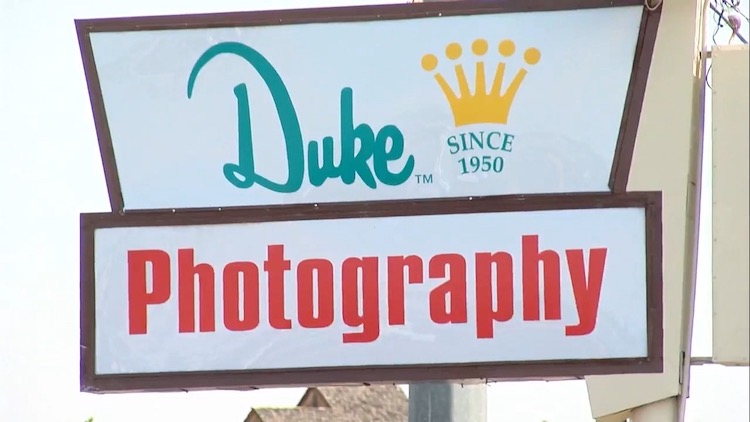 Duke Photography Could Be Replaced by Raising Cane’s

The iconic Duke Photography building in Phoenix could be replaced with a Raising Cane’s Chicken Fingers.

The blush-colored building with a teal awning is known for its distinct typographic sign, featuring the Duke Photography logo. The studio, established by the Duke family in 1950, has been responsible for decades of high school senior photos, family portraits and other documented milestones.

The building, located near the southwest corner of Seventh Avenue and Thomas Road, was sold for $2 million to local investor Aaron Klusman.

Raising Cane’s recently filed a zoning adjustment application for the site, requesting permits for outdoor dining and a drive-thru facility, according to a copy of the zoning application provided by the Encanto-Palmcroft Historic Preservation Association.

Raising Cane’s is a national fast food chain from Baton Rouge with more than a dozen locations in metro Phoenix. The restaurant is known for its breaded chicken fingers and “Cane’s sauce.”

The Willo board will vote on the issue on May 13, potentially issuing a letter of support, denial or modification, according to a Facebook post by Robert Cannon, president of the Willo Neighborhood Association.

“Any resident has had their graduation, wedding photos there,” Cannon said. “That building is historic in terms of life span of people in Phoenix. It’s very nostalgic, if you know what I mean. It brings a lot of emotions to a lot of people.”

Phoenix confirmed the zoning adjustment hearing will be held virtually on June 17 at 1:30 p.m. and is open to the public.

According to the restaurant’s permit request, there are plans to demolish the building before selling the land to Raising Cane’s. The restaurant and the landowner are working with the Phoenix Historic Neighborhoods Coalition to “preserve several signs of historic importance during the demolition.”

“At this time it is unknown if the proposed restaurant will display these signs or donate them to the Arizona Vintage Sign Coalition,” the document reads.

Residents and local businesses, including Nami vegan cafe and Ollie Vaughn’s restaurant, have begun rallying on Instagram to save the building, urging people to contact District 4 Councilmember Laura Pastor.

Gabrielle Sikes started the social media campaign. She said she resides in the neighborhood, in the house where Duke Photography founder James Duke and his son used to live.

“I actually heard the news that Duke was being sold a couple months ago and it rose a lot of red flags,” Sikes said. “It’s been there for so long, I was waiting with pins and needles, hoping it’d just get renovated and they’d get some local vendors in there.”

Saving the Duke Photography sign is only the minimum that Raising Cane’s and the landowner can do to preserve the building’s history, she thinks. Aside from her concerns about the traffic that would come with a drive-thru restaurant, Sikes feels disappointed that more wasn’t done to bring local business in.

“After the global pandemic, we had and are losing a lot of the local spots in the neighborhood, including the Persian cafe. I think it’s just unfortunate that they would choose to go with Raising Cane’s,” Sikes said. “It’s not encouraging or cultivating a community aspect. It’s just a fast food place.”

Sikes said she has left several messages with Pastor, but hasn’t received a response yet. She plans on attending both the Willo board meeting and the Phoenix zoning adjustment hearing.