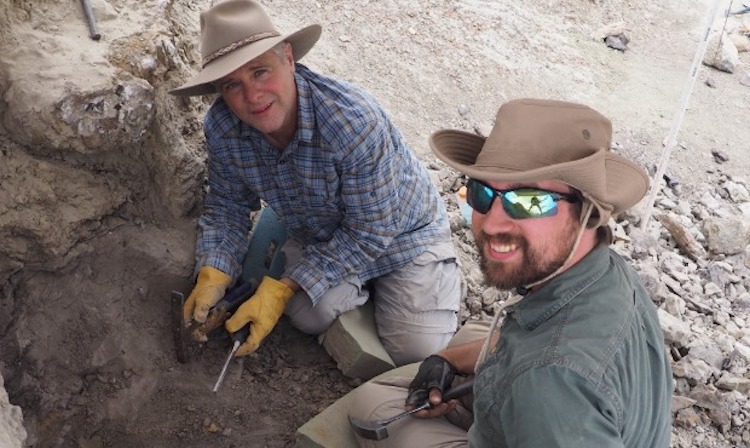 The earliest known brachylophosaur has been discovered in New Mexico by volunteers and citizen scientists of Mesa’s Arizona Museum of Natural History.

The large, plant-eating dinosaur Ornatops incantatus is the first brachylophosaurin reported in the state and dates back approximately 78 million-84 million years ago, according to paleontologists who described the new creature.

Derek Hoffman, a member of Southwest Paleontological Society, and Sherman Mohler, the president of SPS, made the thrilling discovery. 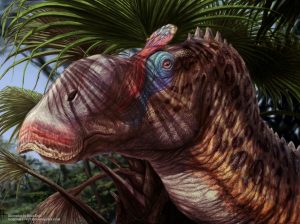 SPS is a partner organization of AzMNH, whose citizen scientists are also volunteers of the museum.

“Derek and I were fortunate that Doug Wolfe and Dr. Andrew McDonald had dropped the SPS team into a fossil rich location, but of course most of what you usually find are bits and scraps,” Mohler said in a press release.

However, volunteers made the rare discovery of cranial material, helping paleontologists to identify the dinosaur had a crest on the bridge of its nose and was duck-billed. Ornatops incantatus means “enchanted ornate face.”

“Citizen science is an incredible benefit to organizations like ours,” Alison Stoltman, acting director of the museum, said in the release. “Enthusiasts with likeminded interests, and a variety of expertise to achieve things that we could not conceive of otherwise.”

The newly discovered dinosaur would’ve been one of the largest in its habitat and a major component of its ecosystem, according to Dr. Andrew McDonald, Western Science Center curator.

“Our ongoing work seeks to understand that ecosystem, how it changed through time, and how it slots into the rich and majestic history of dinosaur evolution in North America,” McDonald said in the release.

The field research involved a collaboration of the Western Science Center, Zuni Dinosaur Institute for Geosciences and SPS, according to the release.

“As a citizen, not much of a scientist, I’m in awe to help in any small way to bring to life our planets’ past history,” Nancy Ebbinghaus, SPS member said in the release.