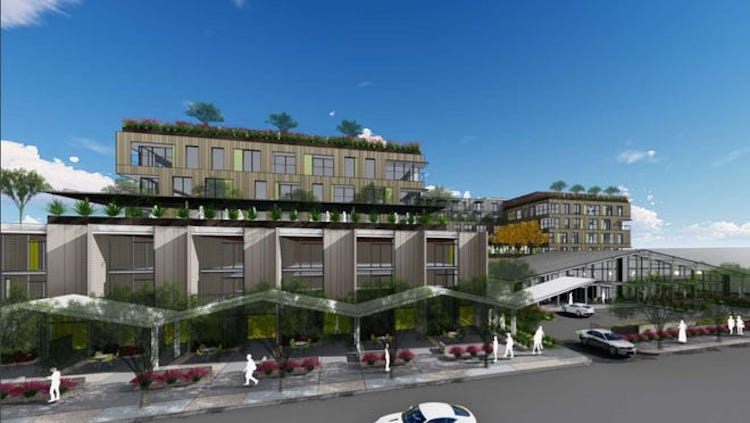 A historic building in Old Town Scottsdale, and the property surrounding it, will be transformed into a new hotel and apartments, which business owners say could breathe new life into the area.

But the proposal for a seven-story building is more than twice what city code allows in the area.

The project got support from the city’s Historic Preservation Commission and a relative of Ralph Haver, one of the most influential Arizona architects of the 20th century. Haver designed the Kimsey building, also known as the Triangle, that stands on the property in the 7100 block of East Indian School Road. 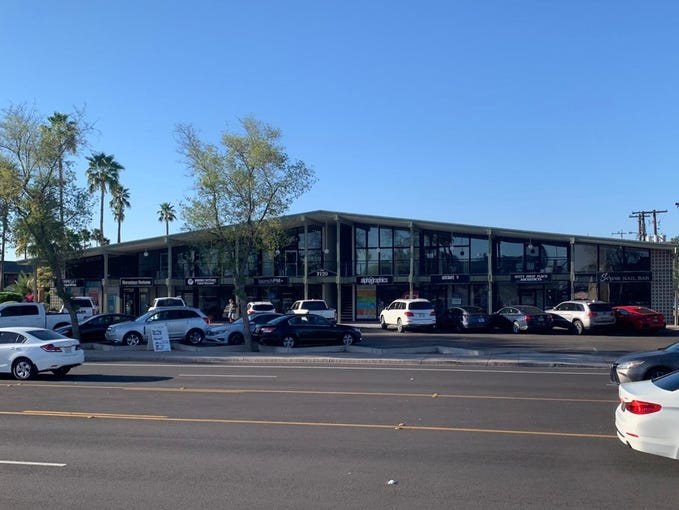 PEG, a Utah-based development company, named the project The Kimsey and plans to maintain most of the original design while adding a taller, bigger and more modern structure to the original building, which currently houses office tenants.

The Kimsey building was finished in the early 1960s and served as City Hall for a year before the Civic Center opened.

Other buildings on the property — a still-operating 65-room Howard Johnson hotel, a vacant event space called The Venue and other vacant commercial properties — will be replaced with PEG’s plans for a 160-room Marriott hotel, an apartment complex with 190 units and a restaurant.

More than 100 local business owners signed a petition asking the City Council to approve the $150 million project, saying the development would bring people and financial stability to the area.

To address community concerns, the developer scaled back the building height it sought, requesting 75 feet after originally seeking to go as high as 96 feet with 230 apartment units. The city code only allows for buildings up to 36 feet in the area.

The City Council approved the project this week in a 6-1 vote, with a provision that the height allowance would be removed if the project isn’t underway after five years.

All five City Council members who voted for the project, along with Mayor David Ortega, said they considered how that southern part of Old Town Scottsdale has been deteriorating over the years.

Councilmember Tammy Caputi said her colleagues are always talking about approving projects that take into account community outreach and preservation.

“Well, here’s that project,” she said while pointing to a map full of red dots.

The map illustrated downtown Scottsdale, where the Kimsey project will be developed, and the red dots represented vacant properties. Caputi added the map shows the downtown area isn’t thriving. 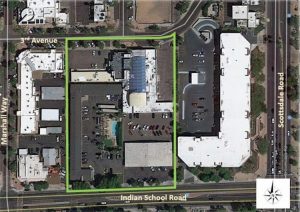 Councilmember Tom Durham listed all the reasons why he decided to support the project in detail. The recently elected council member said he ran on a platform of supporting thoughtful growth, which meant, for him, looking at a series of factors before approving developments.

The key to him in every case is voting for what’s in the best interest of Scottsdale and in his view, the Kimsey project passed his tests, Durham said.

The only dissenting vote came from Councilmember Kathy Littlefiled, who said it wasn’t an easy decision. She said Scottsdale voters last year elected a new council majority that promised to respect city code over developers’ requests.

“It was shameful on the previous council’s part to so ignore their (voters) wishes that citizens had to force a referendum twice when inappropriate buildings were proposed,” she said. “Once was inside the preserve and once, more recently, in downtown, was Southbridge II. Are we so deaf that we can still not hear them?”

Littlefield said she would agree to the development if the height didn’t exceed much over 36 feet — maybe 4 feet over for mechanical components — but that she couldn’t ignore her constituents and agree to more than double the permitted height.

Zoning lawyer John Berry, who spoke at the April 6 meeting on behalf of the developer, said he recognizes it’s important to listen to the community when it comes to height, but it was through the developer’s outreach efforts that a compromise of 75 feet from 96 was reached.

Plans call for an apartment complex with studios, one-, two- and three-bedroom luxury units and underground parking.

Residential amenities would include a clubhouse with a kitchen, a fitness and yoga studio, a community garden, a courtyard, patios, balconies, landscaped terraces, a swimming pool and a pet washing area.

Berry said PEG will make sure that short-term rentals won’t be allowed in the residential portion.

The boutique-like hotel portion of the development will be an AC Hotel by Marriott, according to Berry.

The promise is that the accommodations will be classically designed and locally influenced, bringing business and recreational visitors to Old Town.

The hotel and apartment complex will have seven stories. The developer also has promised to encourage pedestrian connectivity by creating a pathway and providing extra parking.

Others, mostly small-business owners, said the quadrant where the development will be located has deteriorated over the years, with crime, empty lots and high tenant turnover.

They stressed that having permanent residents in the area year-round instead of occasional visitors during the tourism season will help their businesses with more foot traffic and stability.

Berry said Scottsdale requires more outreach than any other Phoenix-area city when it comes to new developments. PEG has worked with the community for the past 14 months, he said.

“But interestingly, the small-business community found us,” he said. “They were the ones who recognized the critical need and shot in the arm that this project could give their struggling businesses.”

Tommy Plato, who owns a restaurant a few blocks away, said the developers have listened to the community’s concerns and made an effort to preserve Scottsdale.

“One of the biggest things (about this project) is that if anybody vote no, you’re actually voting against small businesses … and it’s important that you vote yes because these small-businesses owners are hurting,” he said.

No one against the project spoke during the meeting, although Littlefield read emailed comments from residents asking her to oppose the project.

One of them said it’s particularly important for council members to show how well they are willing to follow the city’s zoning rules as the city is working to put forward to voters a General Plan, which is a document that lays out a broad vision for the city’s growth.

“To quote from one of the emails I received from a resident, ‘The Kimsey proposal is a test case that has wide-ranging implications for the future, including the new General Plan,'” she read. “‘This issue is much more important to Scottsdale voters and to historical Old Town than any other project proposal because in the November election, once again voters called for a clear change in the direction of Scottsdale City Hall.'”

Plan Ahead For Warmer Weather Travel on Arizona’s Highways

Renata’s Hearth Restaurant to Open at Biltmore Resort in Phoenix