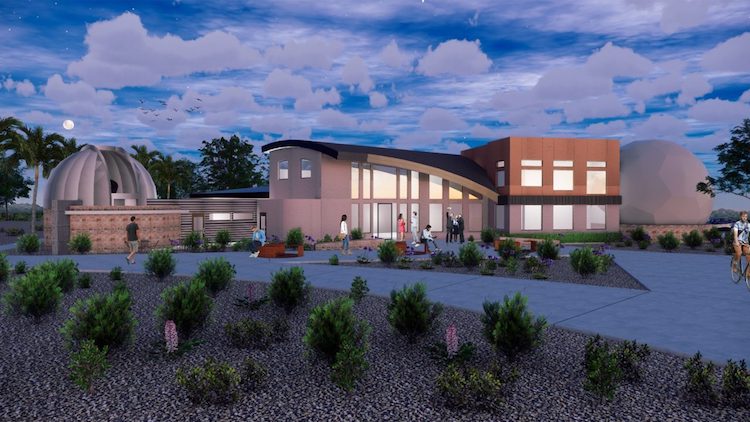 Despite the COVID-19 pandemic, organizers behind the International Dark Sky Discovery Center project are beginning an $18-million capital campaign to get the facility off the ground.

“It’d be the only facility in the world that relates the importance of dark sky preservation to the study of astronomy, the space program, the universe, and life on earth,” Joe Bill, the non-profit’s president, said. “What we are hoping is to find a small number of individuals or organizations that have the means to make a major contribution and bring this project to life.”

Bill was part of the effort that ultimately led to Fountain Hills being designated a “Dark Sky Community” by the International Dark-Sky Association, based in Tucson, in 2018. There are around 30 communities and 100 parks with that designation worldwide, meaning there are strategies and mitigation measures in place to prevent light pollution and make conditions more ideal for star-gazers.

Bill said the Fountain Hills facility — planned near the town’s center — would offer a destination for “astro-tourists” who already visit the state.

“They visit Kitt Peak, they may visit the Mirror Lab at the University of Arizona, they visit the Lowell Observatory … there’s nothing in the Greater Phoenix area,” he said. “That’s something that we can add to the mix.”

The IDSDC would have four main components: an observatory housing the largest telescope in the Valley, a planetarium with “tilted-dome” technology, a theater, and immersion space featuring virtual reality experiences.

Bill said the goal is to partner with schools and universities to collaborate and expand their space education efforts. There’s “great interest at the middle school and high school level as well as for students who are interested in STEM education,” he said. “We have the potential to inspire them to pursue those careers.”

A feasibility study predicts the facility could draw around 22,000 visitors annually. Bill said the $18-million capital campaign would also fund the facility’s operations for five years.