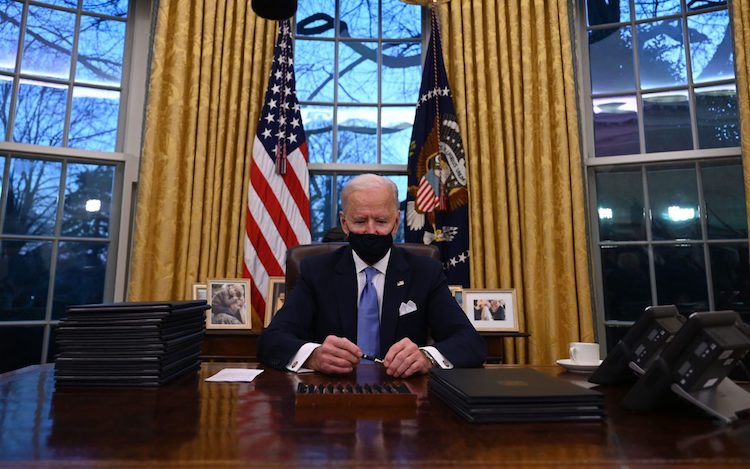 President Biden, in an executive order aimed at “preventing and combating discrimination on the basis of gender identity or sexual orientation,” is calling on schools across the country to allow transgender athletes to participate in the sport of their gender identity.

“Children should be able to learn without worrying about whether they will be denied access to the restroom, the locker room, or school sports,” reads the new order, released on the first day of his presidency.

The order is a strong signal that the Justice Department is going to enforce it via Title IX — and schools that don’t comply risk losing funding.

The order points to Supreme Court case Bostock v. Clayton County (2020) where the court held Title VII of the 1964 Civil Rights Act prohibiting discrimination “because of . . . sex” includes discrimination on the basis of gender identity and sexual orientation.

Heads of agencies are ordered to reassess their policies dealing with Title VII or any statute prohibiting sex discrimination.

Transgender athletes in schools was a hot topic of debate last year, when 17 states introduced bills to restrict athletes’ participation to sports of their gender assigned at birth. Only one became law– in Idaho. The Trump administration supported the ban, but a federal judge temporarily blocked its implementation after a lawsuit from the American Civil Liberties Union (ACLU).

The Trump administration also intervened in Connecticut, when the U.S. Department of Education (DOE)  found a law allowing transgender high school girls to compete on girls’ sports teams violated the Title IX right of girls assigned female at birth. The DOE threatened the Connecticut schools with pulling funding or facing action from the DOJ, but neither happened. The administration had jumped in to support a case of several cisgender girls seeking to block the state policy. The plaintiffs argued transgender female runners had an unfair physical advantage.

The case has yet to be decided.

Currently, 14 states and the District of Columbia have policies similar to Connecticut’s, according to Transathlete.com. Fourteen others allow transgender participation with certain conditions, such as hormone treatments or other proof the athlete is transitioning, according to the organization.

Last year, a group of Republican senators introduced a bill that would revoke federal funding of schools that allowed transgender girls to compete in women’s sports, but it didn’t go very far. Former Sen. Kelly Loeffler, R-Ga., who co-sponsored the bill, highlighted a dispute in Connecticut where two competitors, who were born male but identified as female, won 15 girls state championships.

Erin Buzuvis, a professor at the Western New England School of Law who specializes in gender and discrimination in education and athletics, told The Associated Press the Connecticut case could “evaporate” if the new administration doesn’t want to press it.

“The Idaho situation is different because it is a state law that is being challenged under the equal protection doctrine,” Buzuvis said. “That could set some sort of national standard about what kind of policies states are allowed to have or prohibited to have. But that doesn’t necessarily mean that the case would say, ‘Here is the one policy that all states must have.’”