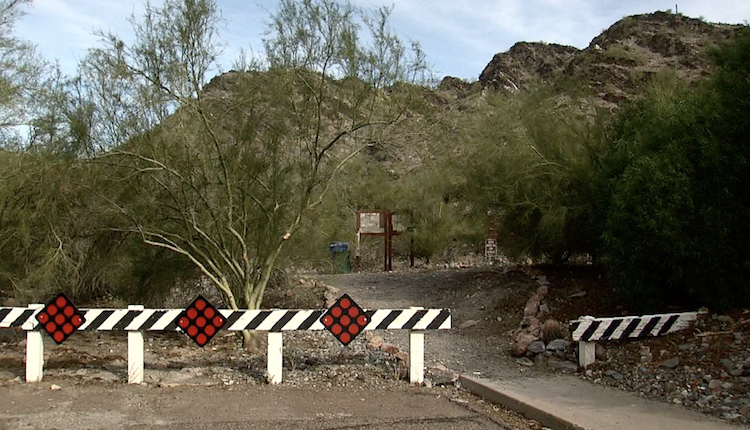 Construction is underway on a water pipeline, part of a large project that drew concerns from neighbors but seems to be advancing smoothly so far.

The work to replace the 48-inch-diameter water main that provides water to the north part of the system, started in April and is expected to be finished in April of 2021, according to Darlene Helm, deputy Water Services Director for the City of Phoenix.

That water main needs to be rehabilitated and replaced as it has reached the “end of its useful life,” Helm said.

This pipeline offers water for the system starting at the water treatment plant at 24th Street and Maryland Avenue, then heading west to 20th Street and north to Orangewood Avenue, where it will cross the 51 freeway and connect to the existing pipeline.

“I think all of the construction industry has adapted to the (COVID-19) pandemic,” Helm said. “It’s been a pretty typical construction project in the sense that there were some unknown utilities that we came across, soil conditions that were harder or different than what we had expected.”

She said city officials have been doing outreach with residents in the neighborhood and encouraging them to sign up for an email distribution list that offers construction updates.

The city adjusted the work zone on Maryland Avenue near the Granada Park tennis courts to allow for two-way traffic along the north side of the street, as of late last month. Work continued south of the traffic lanes that were narrowed and people were urged to watch for barricades and cones to steer them through the area.

Elaine Kates, who lives in the area, said she has adjusted the route she uses due to the construction. However, she said she is used to seeing much traffic in the area when classes end for the day at Madison Heights Elementary School, which is at 7150 N. 22nd St.

“We had to stop using 20th Street…they just basically opened it up again,” Kates said. “At least 22nd Street was saved.”

Helm said the city has been working with the Madison Elementary School District to try to allow for an easy drop-off and pick-up of students. She said there were no traffic issues related to students around the school until around mid-October as classes were being held online due to the pandemic.

Citizens’ push to protect their neighborhoods and the Phoenix Mountains Preserve earlier this year led the city to move installation of another planned pipeline closer to the 51 freeway. The city will install that 66-inch-diameter water pipeline closer to that freeway, after it approved a right-of-way agreement with the Arizona Department of Transportation (ADOT). Phoenix’s Water Services Department approved the agreement with ADOT to permanently use the right-of-way.

Construction on the 66-inch-diameter pipeline is expected to start in April of 2021 and should be finished by the end of 2022, according to Helm. The city had hoped to start construction on that pipeline in January but due to the pandemic, it had to be moved back to April, she said.

Libby Goff, an avid hiker and board secretary for the Phoenix Mountains Preservation Council, said the construction on the 48-inch water main has not impacted her hiking so far. She said she has noticed the impact of the work at Granada Park.

“I rode my bike at Granada Park; there’s a huge impact there,” Goff said. “I can get to the 22nd Street trailhead and it still looks wonderful.”

She said luckily there will be some trails accessible from several trailheads in Dreamy Draw Recreation Area during construction.

The 66-inch-diameter pipeline is needed to address drought concerns on the Colorado River and it will offer alternative water supplies to north Phoenix as a water shortage looms, city officials have said. It will start at the 24th Street water treatment plant, head north along 21st Street, go west on Myrtle Avenue and then north near 20th Street, ending at 32nd Street and Shea Boulevard.

“It’s a work in progress and we’re trying to communicate the best we can with the email and just with our outreach efforts, trying to just let people know ahead of time what’s going on and I think that helps quite a bit,” Helm said.

Click here for more information on the Drought Pipeline Project

Fans Can Have Their Photo at 16th Hole at Phoenix Open

The Science of Ripley’s Believe It or Not! to Open at Arizona Boardwalk in Scottsdale