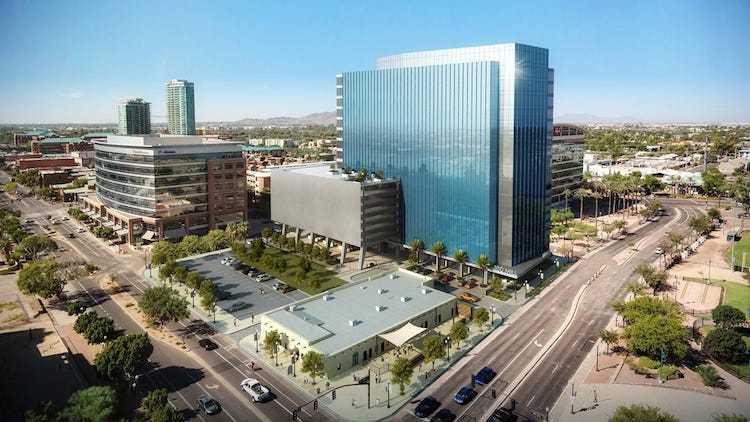 Amazon already ranks as one of Arizona’s largest employers, but it is set to hire 500 more people over the next two years at an expanded technology hub near Tempe Town Lake.

The online retailer said it will lease 90,000 square feet of space in a building under construction at 100 S. Mill Ave., part of the Hayden Ferry Lakeside development just north of the Arizona State University campus.

The complex will feature 1.6 million square feet of office, retail and residential space. Amazon also has rented space in other nearby buildings, where it employs about 3,000 people.

Amazon already has about 17,500 full-time and part-time workers in Arizona, largely at distribution centers.

Amazon’s employment in Arizona has roughly doubled over the past year and a half, and most of the company’s jobs in the state have been created in the past decade.

Metro Phoenix already had one of 18 tech hubs for Amazon scattered across the country.

The new positions in Tempe will include those in a range of technology and non-tech fields, including systems development engineers, data scientists and marketing and human-relations staff.

On top of the 500 new jobs, Amazon currently has more than 150 open tech and corporate positions in the Phoenix area.

The 500 new Amazon tech and corporate jobs will support a range of retail and other operations, including greater efficiency in Amazon’s product-sorting process, new tools for Amazon photos and new machine-learning models to personalize the shopping experience.

The company now has 35,000 employees across its 18 tech hubs and headquarters in the Seattle and Washington, D.C., areas. The other five cities receiving tech jobs are Dallas, Detroit, Denver, New York and San Diego.

In addition to what it calls highly competitive salaries and full benefits, Amazon offers various programs to help employees improve job skills such as paid cloud-computing apprenticeships and tuition-reimbursement programs.

Pharmacists Now Allowed to Give Children Vaccinations in All 50 States