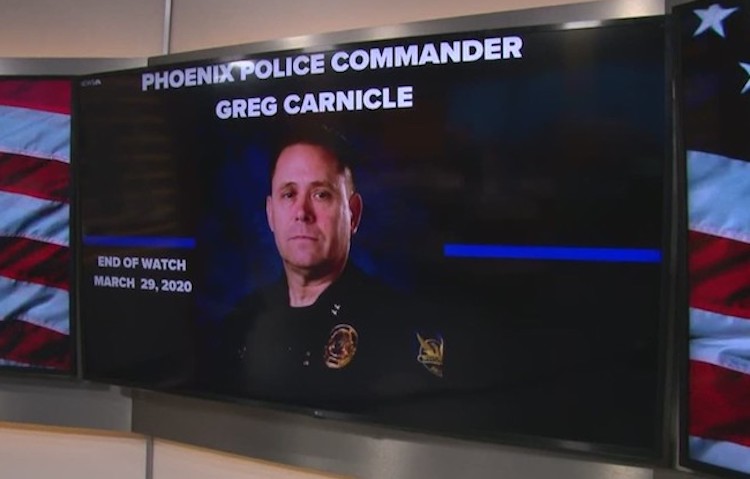 The Phoenix Police Department is planning a virtual moment of silence to honor the life and sacrifice of Commander Greg Carnicle.

Carnicle was shot and killed Sunday evening by a suspect in a domestic disturbance call.  Two other officers were injured in the shooting.  Officer Alicia Hubert was released from the hospital and is recuperating at home.  Officer Marissa Dowhan remains hospitalized while her condition continues to improve.

To allow the community to come together virtually, the department will be hosting a virtual moment of silence to be held on the Department’s Facebook page on Tuesday April 7 at Noon.  You do not need a Facebook account to participate in this Facebook Live.  Simply go to Facebook.com/PhoenixPolice to find the latest posts, which will include the live stream on Tuesday at approximately 11:50.  You can also do a virtual RSVP to the event on that same page.

The department is also inviting community members to show their support for the Carnicle family during this difficult time by recording a brief 5-15 second video paying tribute or honoring Commander Carnicle.  This could include recording your observance of the moment of silence, a verbal message for the family or a salute to Commander Carnicle.   Those tributes can be shared to social media with the hashtag #RIPGregCarnicle.  The Department’s social media team will then assemble those tributes for presentation to the family as a lasting memory of the sacrifice made by the husband, father, grandfather and son.

Tuesday’s private immediately family funeral mass will be held at 10 a.m. at St. Jerome Catholic Church.  The service will be shared live with the community through the Phoenix Police Department’s Facebook page.

MLB Talks Hosting All Games In Arizona Starting In May