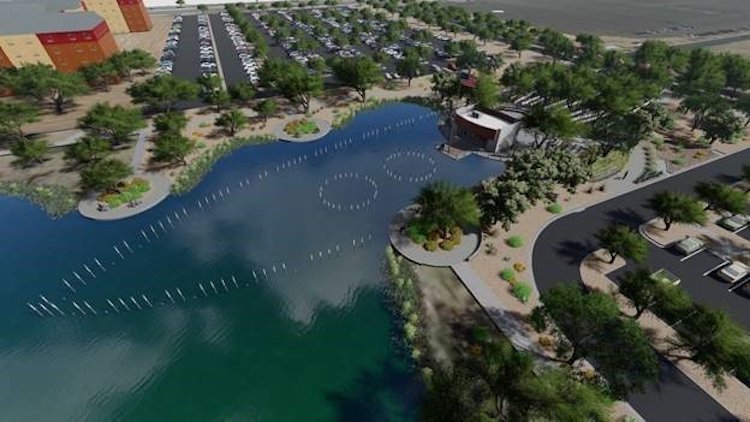 Both displays were created to honor the veterans who died during the attacks of Pearl Harbor and who were aboard the USS Arizona that sank on December 7, 1941.

At Salt River Fields, a portion of the crate used to ship the boathouse is on display. The piece itself is protected by glass and the relic room is surrounded by a small body of water and a beautiful garden.

“It was part of the boathouse, so it sat exactly where it’s sitting in the gardens right just below the flag and these planks right here once upon a time had admirals walking on them,” she said.

“The U.S. Navy was not able to incur any type of debt when bringing this piece here, so everything was done via the tribe funding or via volunteer efforts,” Vasquez said.

“We build a two-scale garden to feature this piece,” Vasquez said. “There are over 1,500 columns that represent each and every life that was on the ship that day. All of the columns that have lights — they represent those who perished.”

The short columns, according to Vasquez, represent survivors and the exterior columns actually outline the U.S.S. Arizona.

The entire project from start to finish was a labor of love.

“This whole thing started probably in 2007. Our veteran’s group applied for a flag that flew over the monument at Pearl Harbor over the U.S.S. Arizona Memorial site and getting that thing started, turning with her post and applied for this piece that we received finally,” said Martin Harvaier, president of the Salt River Pima-Maricopa Indian Community. “I want to say this project, I want to see this project took probably over a year as far as construction getting it done to be here today.”

The USS Arizona’s boat house represents the largest — and only — piece of the memorial to ever be given to a tribal community.

As for the memorial gardens, they aim to honor military members who were aboard the ship during the attack, as well as all military veterans who have served the country. The edifice is displayed at the edge of the lake and at the center of Gardens.

LED light posts represent those aboard during the attack. As each day ends, those columns emit a subtle glow that transforms the memorial at night representing each individual as a light that will stand the test of time.

Commemorative columns line pathways in the garden that each end at a flagpole representing individual branches of the U.S. military. Along the pathways are benches engraved with quotations from individuals who experienced firsthand the aerial attacks.

Arizona Governor Doug Ducey called the openings of these memorials “a proud day for Arizona as the USS Arizona name holds special meaning, a legacy that is beginning a new chapter.”