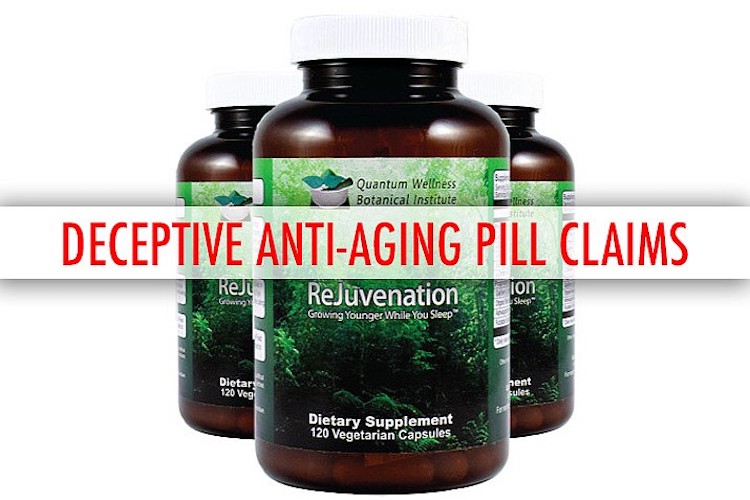 Age Reverse Pill Under Fire By The FTC

An Arizona-based company that claimed its product could reverse the effects of Alzheimer’s disease and blindness has been ordered to stop making baseless health claims.

For years, Quantum Wellness Botanical Institute sold a product called ReJuvenation. The company promised the pill could reverse virtually every effect of aging. One ad claimed the product would “rejuvenate every tissue, organ and muscle” and “boost your memory and your immune system.”

The company said ReJuvenation reversed aging by increasing human growth hormone and the number of stem cells in a person’s body by as much as 682%. The Federal Trade Commission says there’s absolutely no science to back of up any of the claims, so the agency took Quantum Wellness Botanical Institute to court.

According to federal court records, the company agreed to a settlement that will prevent them from making deceptive and false claims about their products. They’re also on the hook for at least $660,000 which may be used to refund consumers who bought the pills, according to the FTC.

“This is another company promising older adults an anti-aging wonder drug that reverses the effects of disease,” said Andrew Smith, the director of the FTC’s Bureau of Consumer Protection. “If you make those kinds of claims, you’d better have credible science to back it up or the FTC is coming for you.”

This is a good reminder for all consumers to beware of so-called health products that sound too good to be true. The FTC says red-flags for fraud include:

-Promises of no-risk money back guarantees

Arizona Office of Economic Opportunity Predicts the State Will Add Over 159,000 Jobs Over Next Two Years