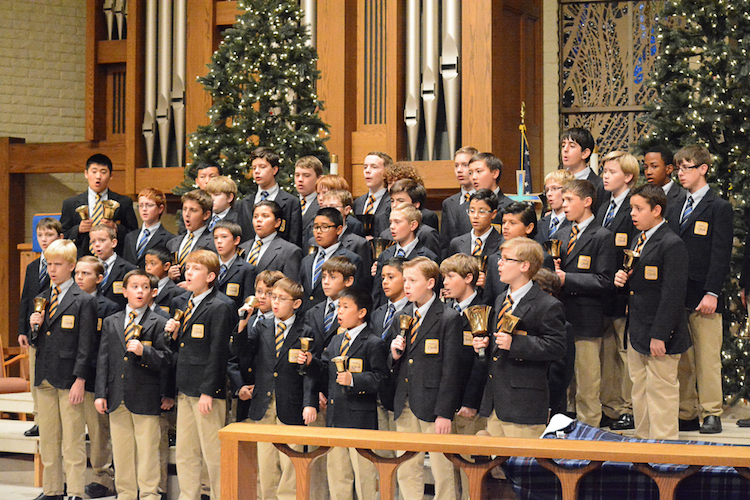 Phoenix Boys Choir Bonds Over Music While Traveling The World

The Phoenix Boys Choir is an organization founded in 1947 that offers programs with voice training and music theory lessons, as well as opportunities to perform in the Valley and around the world. It is an exciting time of transition for the choir as Herbert Washington began his work as Harvey K. Smith artistic director in June while Mitra Khazai began as executive director of Phoenix Boys Choir in October.

Phoenix Boys Choir, which is based at 1131 E. Missouri Ave., will perform in several venues this winter including a holiday concert at 5 p.m. on Dec. 14 at Camelback Bible Church at 3900 E. Stanford Drive. It will hold an open house with holiday carols and cookies from 6 to 7:30 p.m. on Dec. 10 at its building on East Missouri Avenue. Its spring session for Minuets, which are music and movement classes for four to six-year-old boys and girls, starts Jan. 28 at the same location.

Washington, who was part of the choir as a boy, said the mission of the choir is not just about teaching boys and young men to sing but also to teach them valuable life skills. He grew up in south Phoenix and dealt with family problems, including parental alcohol and drug abuse, time living in a foster home and his involvement in gangs. Washington’s elementary school music teacher told him about the Phoenix Boys Choir and he was hooked as soon as he joined it. Eventually a mother of another boy in the choir adopted him.

“I loved it,” Washington said. “Music was the way that I could express myself. There are so many boys like me that don’t have the resources but have a passion.”

He previously worked as director of Middle and High School Choral Activities at Gilbert Christian Schools and Encore director of the Chandler Children’s Choir and said the social component of Phoenix Boys Choir is important.

“There’s so much to choose from for these boys,” he said. “They’re busy. They feel connected to each other. I don’t know what they faced in the day at school. When they come here, they need to feel like they’re surrounded by love.”

Boys in the choir learn to read music, sing in other languages and develop poise. They are taught to shake someone’s hand and look people in the eye, skills the boys revealed at the recent rehearsal. Washington said it teaches the boys discipline and leadership skills and develops their character.

The youths must audition to get in the choir, other than the Minuets, and the Tour Choir, which is an advanced level, must be fluent in sight-singing and demonstrate a resonant and flexible tone. They rehearse Tuesday evenings and Saturday mornings and have performed in France, Germany, Switzerland and Austria, sometimes staying with host families in the other countries.

Nathan Shenk, 14, of North Central Phoenix, is in Phoenix Boys’ Choir’s Masters Choir, which is for boys who have been with the choir singing whose voices have changed and alumni, who can be men of any age.

“It brings people together,” Nathan said. “It’s like unity. I love singing, to do that and share the experience with other people it’s great.”

A tenor, he has traveled with the choir to New York City, Canada, China, Austria, Germany and France. Nathan said the choir has taught him how to perform and helped him gain confidence, as well as manners.

“It’s always fun to see the different cultures and how they work,” he said.

Andrew Brown, 12, of Phoenix has traveled to New Mexico, Spain and Portugal.

“It provides a lot of opportunity in the form of leadership skills, friendship,” Andrew said. “We have to do a lot of memorizing. I really like Mr. Washington a lot. He really connects with the kids really well.”

Phoenix Boys Choir also has a Cadet Choir for beginners ages 7-9 who participate in a local day camp and learn the basics, including showing a pleasant head tone in tune and performing in unison. The Town Choir is an intermediate level group for those promoted from the Cadet Choir or boys who have received advanced musical training. They attend an out-of-town summer camp and take part in a tour to a neighboring state.

Adam Zhang, 10, of Phoenix, likes singing in the Town Choir.

“It’s like very emotional,” Adam said. “It’s relaxing. I actually joined a choir because I was like singing all day.”

The choir sings songs from a variety of genres including classical and contemporary tunes. They even won a 2000 Grammy Award for Best Choral Performance.

Click here to learn more about the Phoenix Boys Choir.

Phoenix Elementary School Board Votes to Not Close Three Schools