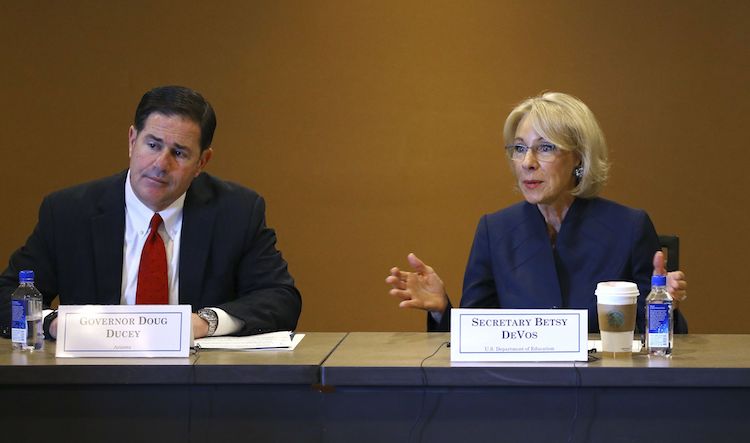 U.S. Education Secretary Betsy DeVos on Thursday touted her $5 billion plan to fund tuition for private school students, telling a room of supportive parents and lobbyists that it would improve the quality of education.

“Arizona is a real leader in giving parents and students the kind of freedom that they need to find their right fit for education, and I’m so grateful for the example that you are setting here,” DeVos said, seated next to Republican Arizona Gov. Doug Ducey on the sidelines of a conference of conservative legislators.

DeVos is pushing her plan to create “Education Freedom Scholarships” allowing businesses and individuals to get 100% federal tax credits for donations to scholarship-granting groups. The Republican is a major backer of school vouchers and formerly led the American Federation for Children, which promotes the programs in Arizona and other states.

Arizona has a similar program that uses tax credits to fund private school tuition scholarships. It also has an “Empowerment Scholarship Account” school voucher program that takes state money and funnels it to more than 6,000 private or home-schooled students.

Arizona public school teachers revolted in 2018 and persuaded voters to block an expansion of the state’s school voucher program enacted by the GOP-controlled Legislature and endorsed by Ducey. Voters rejected the expansion by a nearly 2-1 margin. Tens of thousands of teachers also went on strike that year over low pay and school funding and won big pay raises from Ducey and Arizona’s Republican-dominated Legislature after he had rejected them earlier.

Despite the voucher program rejection at the ballot box, Ducey praised the program and urged DeVos to take it nationwide.

“Empowerment scholarship accounts work and there’s no better time to scale this successful model to the rest of the country,” he said.

DeVos says her new $5 billion tax credit program allows parents to choose the best education for their children. Democrats pronounced it dead on arrival in Congress, but DeVos hasn’t given up.

Her plan would allow states to design their own programs or use the credits in existing programs, with parents allowed to use the funds for education costs, including school tuition, tutoring, special education costs and home schooling.

Later Thursday, DeVos carried a similar message to a conference held by the American Legislative Exchange Council, a group of conservative lawmakers, business interests and others on the right who promote the advance of conservative legislation. The group known as ALEC drew protesters from several liberal groups and teachers at the start of the three-day event on Wednesday.

She also criticized the existence of her own agency, saying education should be left to the states.

“Federal taxpayers contribute less than 9% of total education funding in this country,” DeVos said. “So why is a federal agency of more than 3,000 employees needed to administer it at all?”

End Of Monopolies For Arizona Utilities Could Become A Reality