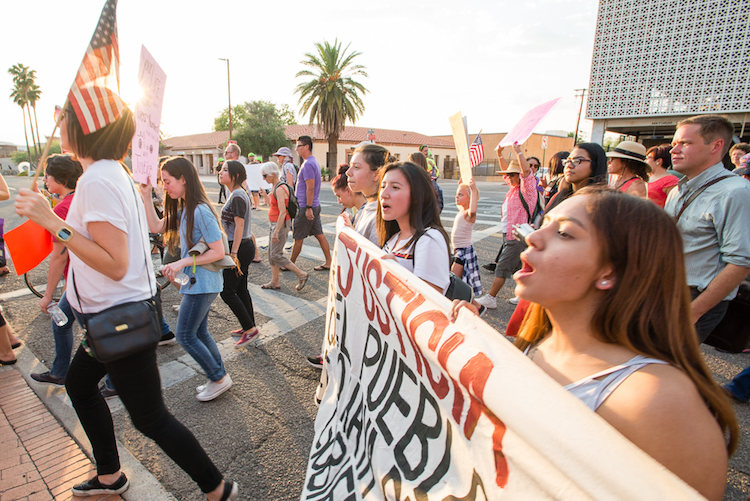 Tucson is well known as the birthplace of the 1980s Sanctuary Movement, an effort by churches to help refugees from Central America and shield them from deportation.

Now, as President Donald Trump’s immigration policies put renewed focus on the treatment of people who come to the United States without authorization, the progressive city once again grappled with what it means to be a city welcoming of immigrants.

Tucson Voters overwhelmingly voted to reject an initiative Tuesday that would have made Tucson the state’s only sanctuary city. Voters were concerned that it went too far in restricting police officers.

The initiative, known as Proposition 205, was started by a group of activists looking to give a voice to the city’s large Latino communities.

“We can make sure that our city is more equitable,” said Zaira Livier, executive director of People’s Defense Initiative. “That our city sends the message to our own residents that they’re safe, that they’re valued, that they’re not indispensable to us, that we are willing to fight for them.”

Tucson’s entire city council, were opposed, citing concerns about unintended consequences and the potential for losing millions of dollars in state and federal funding. They fear retaliation from the Trump administration, which has fought aggressively against sanctuary cities and tried to restrict their access to federal grants and would jeopardize the funding Tucson gets from the state.

They also worried that it would tie the city’s hands in cooperating with federal law enforcement on matters that have nothing to do with immigration.

Back in 2012, the Tucson City Council designated it an “immigrant welcoming city,” expressing support but stopping short of calling it a sanctuary city. Tucson Police Department policies already limit when and where officers can ask about immigration status.

“We are all very much opposed to most — or probably all — of the policies of the Trump administration and have done everything we can in our power legally to make it possible to protect all immigrants who come to our community,” Mayor Jonathan Rothschild said of the seven-member city council. “You can’t change federal or state law at the city level.”

The initiative takes aim at SB1070, the 2010 immigration law that prohibits sanctuary cities in Arizona and requires police, when enforcing other laws, to verify the immigration status of anyone suspected of being in the country illegally. It prompted widespread protests and a lawsuit by President Barack Obama’s Department of Justice. Courts disposed of much of the law but upheld the requirement for officers to check immigration papers.

Proposition 205 was an effort to restrict the ways that Tucson police officers interact with immigrants and people suspected of being in the country illegally. It would declare that “it is the policy of the city that the city be a sanctuary and safe refuge for all persons.”

The measure would have put new restrictions on when and where a person can be asked about their immigration status and require officers to first tell people that they have a right not to answer questions about whether they’re in the country legally. It would have limited the factors officers can consider in developing “reasonable suspicion” that a person is in the country illegally, the threshold to trigger a check of immigration status under SB1070.

It also would have prohibited the city from working with federal law enforcement agencies unless those agencies agree in writing to forego their right to conduct traffic stops within city limits.