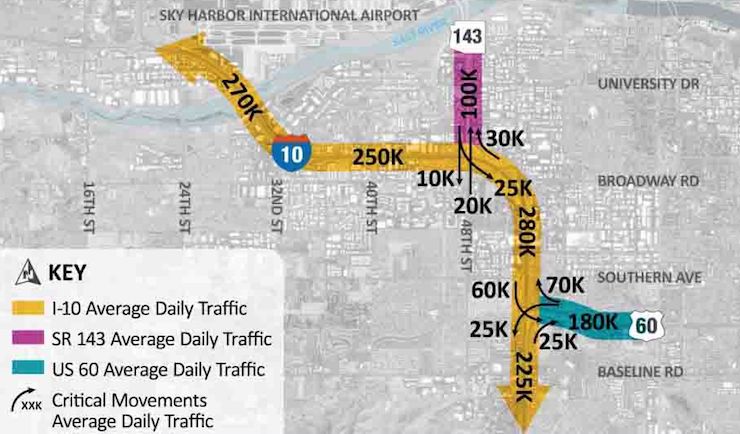 It’s no secret that driving on the I-10 is an absolute nightmare.  From the dangerous conditions when going from the US 60 onto the I-10 or to SR 143 to the heavy traffic going north on the I-10 from the Santan Loop 202 Freeway or anywhere south of Baseline Road, an improvement is a long time coming.

Fortunately, last week the Arizona Department of Transportation held a hearing to discuss its strategies to improve and widen a section of the I-10 from the Santan Freeway to the I-17 split.

ADOT requires a hearing to be held before it finishes a final environmental impact study later this year and submits its final plan to the Federal Highway Administration.  Once this is all complete, ADOT will begin the worst part of the I-10 that impacts thousands of drivers daily.  This overhaul will cost approximately $600-million dollars and will be a four-year project.

At the hearing, many citizens came to learn about the project, view maps, and share their feedback on the project.  ADOT appeared to be going full steam ahead on this undertaking.

Although it seems unlikely, there is the possibility that this project will not go forward for several reasons.  Although ADOT has spent years conducting studies on that stretch of highway, they could decide they don’t want to go ahead with the project.

Along those lines, the FHA, who will be paying for a huge portion of this project, could decide to not go ahead as well.

Although this project will ultimately relieve many headaches for East Valley commuters, it will make things even worse before it gets better.

If all things go to plan, this project will most likely begin in early 2021 and will bring closed ramps, frustrating detours, and blocked lanes.

In response to this, ADOT spokesman Tom Hermann encouraged drivers to “think about what’s your alternative, what’s your plan B and your plan C.”

Another idea discussed with this project is a new concept called collector-distributor lanes.  Although these are a new concept in Arizona, they are already popular in California.

Collector-distributors lanes are similar to frontage roads, however they don’t intersect with perpendicular streets and have entrance and exit ramps.  Ideally, these roads will ease drivers onto the lanes of I-10 without slowing down the flow of traffic.

Other improvements included in this project include:

Because of the huge need for this project on the estimated 300,000 vehicles that use that stretch of highway each day, ACOT’s spokesman Hermann says:

“Without major improvements, the I-10 in the study area would suffer degraded traffic conditions, travel delays, and challenging mobility for moving goods, services and people.”

“The existing traffic congestion continues to increase from the extensive growth the Valley has been experiencing. Recognized as a potential transportation problem in the early 2000s, the already challenged movement of goods, services, and people would experience major delays in the foreseeable future,” it adds, stressing that continued growth in the Valley “would continue to outpace the facility’s capacity to handle the demand.”

Hermann also stated that the opening of the South Mountain Freeway, tentatively scheduled for Dec. 20, will not improve driving conditions along the worst section of I-10.

According to Hermann, the South Mountain Freeway is expected to have 120,000 to 140,000 drivers each day; it wasn’t created to relieve downtown driving conditions.

“It’s not built for that purpose. It’s part of the big picture of the Valley freeway system,” he added.

As a result, the area targeted for this project may experience increasingly longer rush hours and delays, as it’s predicted that overall daily traffic will approach 340,000 vehicles by 2025.

Although ADOT is continuing its evaluation of the project, the preliminary environmental study indicates no major barriers to the project.  This plan will also not require ADOT to spent millions of dollars on land acquisition, as it did for the South Mountain Freeway.

According to one ADOT source, three contractors are currently interested in the project and must submit plans that will be judged for the timing of the work and for their “technological innovation”.

These plans must show whether or not to start the project at several points, conceivably the two endpoints of the 11-mile stretch, as the most difficult section of this project will include the actual Broadway Curve.

This project is undoubtedly a huge undertaking that will impact many motorists.  It will be interesting to see how it all plays out.