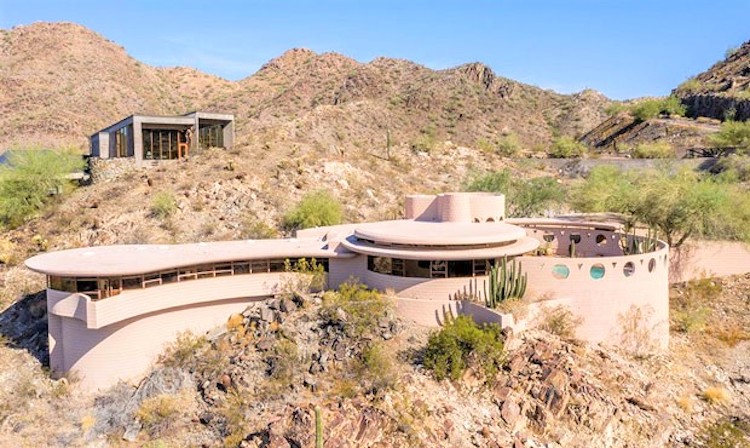 Phoenix Home Designed By Frank Lloyd Wright Up For Auction

Just before his death, famous architect, Frank Lloyd Wright designed the Norman Lykes House in Phoenix. The home was once listed for sale at $2,650,000, but will now be sold by Heritage Auctions in a no-reserve auction, with no minimum starting bid, on October 16, 2019. The home has been off the market since 2016.

The home was built into the side of the mountain, offering stunning views of the city. Wright designed the home specifically for the rocky, uneven site.

“This circular home with rounded windows and walls, custom built in furniture, and a crescent shaped pool is perched on a mountain overlooking Phoenix with a 180-degree view from the living room.  Spectacular inside and out, yet noticeably calming, its curves follow the mountain backdrop,” said Anne Stupp of the Frank Lloyd Wright Foundation Board of Trustees.

The house, also known as the “Circular Sun House”, is the perfect example of Wright’s later work. He died just after he finished designing it. His apprentice, John Rattenbury, oversaw construction of the 3,100 square foot home. It was completed in 1967.

Some updates have been made to the home, including making the master bedroom larger, reducing the number of bedrooms from five to three, and converting a workshop into a home theater.

“We want to make sure the person that buys this house maintains the integrity of the home, remodels it, keeps it and loves it just like the former two owners have,” said Luciano.

The Fiesta Bowl Is Awarding Two-Hundred Arizona Teachers With $5,000 Grants