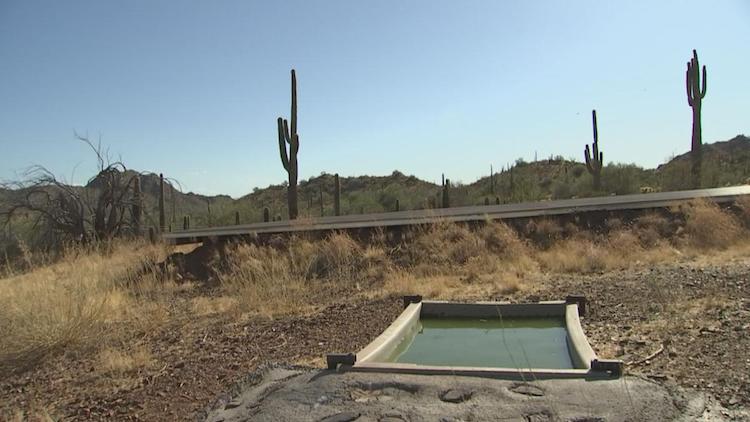 The Arizona Game and Fish Department is asking for donations so that they can keep wildlife hydrated. Incredibly dry and hot summer weather has left wildlife without the amount of water they need to survive.

“Especially this year, because monsoons have been so lacking,” said Joseph Currie, the Habitat Program manager with Arizona Game and Fish. “The animals have been really using the water catchment.”

Mother Nature usually supplies the water herself, but not recently. These catchments Currie mentioned are placed throughout the state in order to help keep wildlife hydrated.

“It’s like a metal roof. It catches the rain and runs to the far end there’s a gutter down there, and it is plumbed into the tanks,” said Currie.

The Arizona Game and Fish Department has 3,000 catchments in total. This year, all 3,000 were filled.

“We’ve hauled over 90,000 gallons in just the last month and about a million gallons since the first of the year,” said Currie.

Emergency water drops by helicopter were done to transport water to catchments that were dried up near Kingman.

“We have to haul water to their places for the wildlife to help them survive the summer,” said Currie.

Less rain means more money that goes towards filling these catchments. This is why the Arizona Game and Fish Department is asking for donations from the public in a campaign called “Water for Wildlife”.

“If we didn’t do that, we would have a severe fluctuation in wildlife,” said Currie.

Click here to make a donation to the AZ Game and Fish’s Water for Wildlife campaign. You can also text the phrase SENDWATER to 41444.

What Will Camel Square Develop Into?