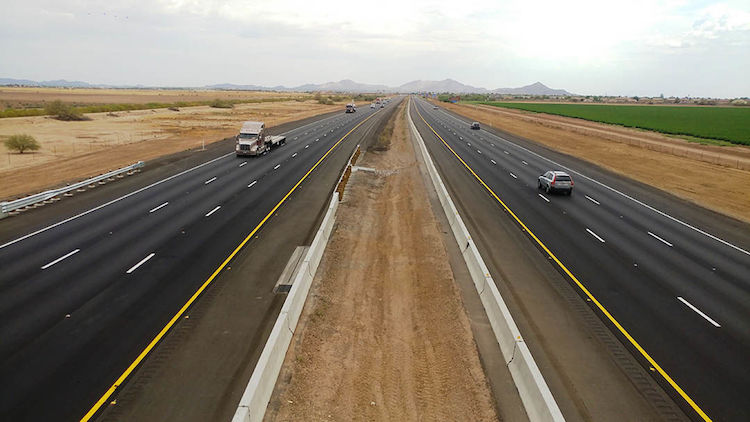 A 4-mile stretch of Interstate 10 in Casa Grande now offers three lanes in each direction, moving the Arizona Department of Transportation even closer to its goal of expanding to six-lane freeway all the way between Tucson and Phoenix.

The $43 million widening project nearing completion between Earley Road and Interstate 8 in Casa Grande also replaced the I-10 bridges over Jimmie Kerr Boulevard to accommodate three lanes in each direction.

This complements a $72 million project widening 4 miles of I-10 to three lanes in each direction between Eloy and Picacho. That work, which is nearing completion, is creating new travel lanes to replace what was a curving stretch, has built a new interchange with State Route 87 and is creating a first-of-its-kind dust detection zone on 10 miles between Eloy and Picacho Peak.

Final work on both of these I-10 widening projects is scheduled for completion later this year. Thanks to these and other ADOT investments in recent years, the 23 miles of I-10 crossing the Gila River Indian Community between State Route 387 near Casa Grande and Queen Creek Road near Chandler will soon be the only stretch between Phoenix and Tucson with two lanes in each direction.

For the remaining stretch with two lanes in each direction, ADOT is collaborating with the Maricopa Association of Governments and the Gila River Indian Community on a design concept report and environmental study on adding a lane in each direction and improving existing interchanges. While funding for initial improvements is tentatively planned for fiscal year 2023, the study will determine when construction would begin and establish the time frame for improvements.