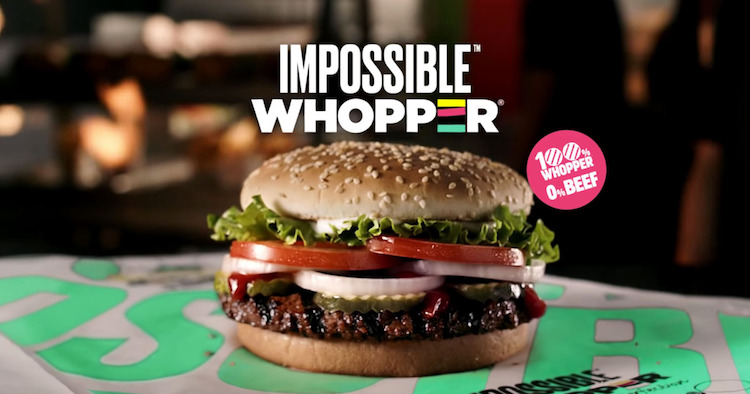 A new sandwich is now available at 7,000 Burger King restaurants across the U.S. The Impossible Whopper was unveiled this week and the new sandwich is being dubbed as a twin to the original Whopper with one key difference, 0% beef.

The main ingredients of the Impossible Whopper are soy protein, potato protein, coconut oil, sunflower oil, and heme. The flame-grilled patty made from plants will also be topped with freshly sliced tomatoes and onions, crisp lettuce, creamy mayonnaise, ketchup and zesty pickles on a toasted sesame seed bun.

North America Burger King Corporation President Chris Finazzo expressed his enthusiasm in a press release. “We are really excited to be able to offer our new Impossible™ WHOPPER® to our guests across the country at an unbeatable value for a limited time. Since we first launched our market tests in St. Louis in April, and later in six other markets across the country, we’ve heard great feedback and know the Impossible™ WHOPPER® appeals to both current guests who are already big fans of the WHOPPER® sandwich, as well as new guests who are excited about this new option. Starting next week, guests across the country will be able to try this this plant-based, flame-grilled sandwich which is true to the original WHOPPER® sandwich that our guests know and love.”

The second-largest fast food hamburger chain in the world is also offering guests a limited-time promotion known as the Impossible Taste Test via the DoorDash and BK apps. For $7.00 customers can receive an original Whopper and the Impossible Whopper throughout the month of August.

Prior to August 8 the Impossible Whopper was only being offered in select U.S. cities including St. Louis, San Francisco, Las Vegas, Baltimore, Miami, Montgomery, and Columbus. Burger King stated that the new sandwich will cost slightly more than the original at approximately $5.59 depending on location.