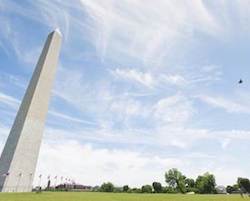 The first-ever F-35 White House flyover was flown by a U.S. Marine Corps F-35B.  Those of us in Arizona know that the Marine Corps Air Station in Yuma is home to F-35B pilot training.  The flyover was part of an event with Polish President Andrzej Duda where President Duda and President Trump announced Poland’s intention to acquire 32 F-35 Joint Strike Fighters.

The flyover also comes at a time when the F-35 Joint Program Office announced that the most recent purchase of F-35s (470 of them) will mark the lowest cost F-35s in history.  The Arizona delegation, dating all the way back to Senator McCain, has long been a strong supporter of the F-35 and understands the strong economic driver it is for the entire state.