Rushing into the office with a binder full of legal papers, she enters the large dark conference room and seats herself at the head of the table. It is 8:30 a.m. on a Wednesday. This is the earliest Nicole Stanton is available to meet since she drops her kids off at school each day before coming to her office in downtown Phoenix.

Nicole Stanton, well known for being the former First Lady of Phoenix, has spent her career at Quarles & Brady practicing real estate and commercial litigation. Quarles & Brady is one of the largest law firms in the nation, with offices located all across the country. She has also spent five years of her time as managing partner of the Phoenix office.

Originally from Utah, Nicole moved to Tucson in 1995 to attend law school at the University of Arizona. After spending a couple of summers in Phoenix for an internship at Quarles & Brady, she eventually ended up in Phoenix after taking a job as a law clerk for former Vice Chief Justice Charles Jones.

“Although I always thought that I would go back to Utah, things just kept keeping me here,” Nicole adds.

Once she realized she was in Phoenix to stay, Nicole decided that it was time to meet someone.  A colleague told her that Greg Stanton was “datable material.” Nicole laughs as she explains that was not the glowing recommendation she was looking for, but she decided to take the initiative and ask him out anyways.

Nicole reminisces, “So, I invited him to meet under the rouse that I wanted to get more involved in the community.”

They met for dinner in Phoenix at the famous Park Central Mall, where the date did not go as well as Nicole had hoped.

“He showed up late and was talking on his phone. I thought to myself, this guy is not dating material!”, Nicole smiles as she reflects and shares the memory.

But regardless of the poor first impression, their relationship continued to grow, and they have now been married for 14 years with two children.

On top of building a family together, the Stantons have gone through six political campaigns. Greg Stanton most recently was elected to Congress and is now serving as the Representative for Congressional District 9, covering parts of Tempe, Scottsdale and Phoenix.

Reflecting on their time together, Nicole explains, “While he was mayor, I was probably over to his office at city hall a dozen times in six or seven years. I have my own professional life and things that I’m involved in.” 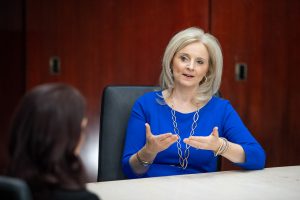 Focused on her career, Nicole served as managing partner of Quarles & Brady for five years.

Nicole explains how she worked her way into managing partner at Quarles & Brady by doing the work others didn’t. She developed a keen talent for navigating ethical issues that lawyers often face when taking on clients.

Over time, she became the ethics guru in the office. She openly offered help to other lawyers who were challenged by complicated ethics issues on many of their cases.

“I think Quarles & Brady saw how I was able to handle tough issues with confidentiality and care,” she offers

As a litigation attorney, you have to learn everything about the business you are representing, including how they operate, to serve them best. Nicole explains that through the years she has represented a range of businesses from cities to funeral homes, and even the dairy industry.

“What I like about being a lawyer is that no two days are the same in terms of continually having to learn something new,” Nicole notes.

Her work and commitment to the community are recognized by 29 different organizations, including her 2017 recognition by AZ Business Magazine as one of the top 100 lawyers in Arizona.

While Nicole has had much success in her career, she is still very aware of the particular challenges that women face in a male-dominated workforce. She explains that while progress has been made to ensure women are not excluded, there is still work to be done.

“What I think is much more prevalent, and perhaps even more dangerous, is the subliminal and more subversive things that go on which continue to hold women back.”

While navigating her career, Nicole learned there are two ways for women to leverage success.

“You can either adopt the current infrastructure, or you can create your own. Creating your own is a lot more work, but in the long term is more consistent with the way I live my life … it has been much more successful and effective for me.”

Nicole has continued to create a network of support throughout her entire career. She will often go to lunch or coffee with people after she drops her kids off at school. This keeps her from feeling obligated to attend events during hours she would usually spend with her family, such as after-work happy hours.

“Happy hours do annoy me because it is six men and one woman because women are usually responsible for picking up the kids from school. Happy hour is a bonding time for men, and they talk and network opportunities. This is not an institutional problem, but life can be socially non-inclusive for women,” mentions Nicole.

Nicole believes it is really about finding a group who can support you in the way that you actually need to be supported.

When it comes to law firms, Nicole explains how she has seen other women fight for inclusivity.

“Women in legal leadership have told law firms, including Quarles & Brady, that unless they diversify their team to include women and other groups, we will not be giving you new work.”

In her experience, those demands are only made if you have a woman in charge or a man who is willing to make that demand. That is why she believes women need to continue to push their way into positions of power. “That is how we really influence change, by getting into those positions and supporting women,” urges Nicole.

Nicole hopes that the current pressure to ensure women have equal rights continues — not just for herself, but for her daughter and the future career she will have one day.

“There is great momentum right now to make a change, and that is when you have to make your move — when everyone is rowing in the same direction.”

Involvement in the community

In addition to sharing her passion for law and women’s rights, Nicole explains how she is focused on being a mom and continuing her work in the community.

During Nicole’s term as First Lady of Phoenix, she spearheaded an anti-bullying campaign called Stop Bullying AZ. The program has transitioned into a prevention effort in partnership with Adverse Childhood Experience Study (ACES), working to identify ways to prevent the adverse effects of bullied children and the long-term health issues it may cause. The program also works to create a supportive environment for kids who have faced trauma.

Beyond the anti-bullying work Nicole has created, she explains how she is committed to Phoenix. She is currently examining what work in the community she wants to focus on, along with how she and Greg both plan to stay engaged in the community.

Nicole mentions, “I want this to be a place where my kids can get a good job and where they can raise their families.”